Heard from my pal Dave Morgan, who was sailing from Ipswich in Graham (aka Wham) and would be mooring at Eastbourne. However plans to meet up were scuppered.  Dave wrote We set out from Ipswich yesterday and battled through epic seas en route to Ramsgate, but decided to turn back in view of the conditions. In hindsight we had only got about third of the way there in about 6 hours, so we would have been very late arriving in Ramsgate had we continued. So we're back in Ipswich and Graham will leave the boat here for another three months. I am no expert but the prospect of pleasure cruising in the North Sea in December during a pandemic seemed an unorthadox wheeze even for Wham. And the prospect of a rendezvous on a bench outside at Eastbourne marina, which Robin told me this morning was several miles from the train station, has been scuppered.

Spent a couple of hours recording with Robin this morning. She was doing it from the cupboard under the stairs, running an ethernet cable in there because the reception was no good. At my end Calliope was in on the recording too, but managed to keep her contribution to inaudible purring. I had got up early to gather a few notes together to talk a bit about John McCullough's excellent book Reckless Paper Birds, and Caleb Femi's Poor.

After the recording, and between rain, I went for a walk up to the Hill Fort and achieved my ten thousand paces for the first time since Thursday, and had a chat with Anton.

Lorraine working late tonight, in the final gruelling week of term -- which is always a strain at the best of times. Some schools in London are trying to close early due to escalating infection rates. More festive fun: a mutation of C-19 had been found in London amid steep growth in the outbreak, but the government said the vaccines 'should' offer protection from it, from my limited understanding of how these things work, I expect they are right. I hope so.

Below a mossy trunk. 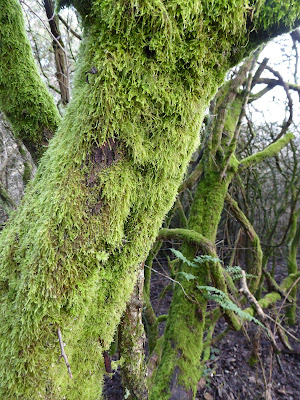