October 06, 2019
Up after a good night's sleep. Beth and her pals Emily and Eliza fragile after a long and lively night, and needing breakfast. Otherwise a fairly quiet day. Went for a walk in the park with Lorraine and excitingly dried clothes in the launderette.

While sitting about in the kitchen this afternoon, Lorraine and I started playing the Sherlock Holmes game that Anton had lent us. Involved lots of reading, and thinking about clues, which led to drinking some wine the girls had brought us. A nice interlude.  Match of the Day was watchable tonight too, with Chelsea winning, and the bonus of the Manchesters City and Utd both losing.

Spoke to Toby, who said there was a strike affecting his school tomorrow. My dratted phone ran out of power as we talked.

More stressing this morning over getting the layout right for the kindle book. But it is now okay I think. After I texted Ellie this morning, she finally revealed to Carl that she had done the cover for Magnificent Grace. He was really chuffed, which was excellent, and was surprised at the pair of us keeping it a secret. It was worth it! It is now buyable on kindle at a knock down price. 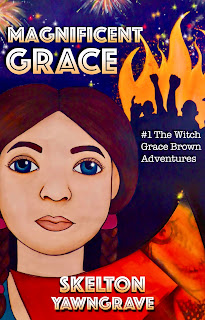