Lorraine went into school for a few hours for a meeting and to do some office work. A big psychological barrier, but she returned reasonably unscathed to make a fish pie of some excellence. I bashed the spuds.

Feeling better, I had a day to dream and write deathless poetry... (insert record scratch SFX). Nope. More absolute f*ckery from Natwest today: a letter about an unpaid cheque on the account that is now closed, and I have spent since April sorting out.  This made me feel murderous I wrote a very scary note to the complaints guy. The Natwestisögur goeth on forever. Otherwise admin and billing to do, as well as an abundance of filing, which was dull but improving.  The good part is things that a few days ago seemed utterly impossible, now seem doable.

Spoke to the Tobster today, on the edge of a little Canadian lake, watching the Romy swim in it. He's planning to come over in October.

I loped off at lunchtime like a diurnal Mr Hyde to see Jewel, who got to grips with my hunched and simian back. I've always liked Jewel, and today I learned the secret of her superpowers. When not banishing evil from the human frame with her fingers, she is spidering over rock faces and doing rope free boulder climbs over crash pad mats. She is a strong woman with strong fingers, and I Dr Jekylled it back home, via Sainsbury's and the Japanese shop for pricey miso soups.

Wanting to read again. Now most of the way through The Lost City of Z. All very Boy's Own, but none the worse for that. A couple of episodes of Frasier before bed. I sent Jade a snap of Brian looking at the VCR. She loves how he gets fascinated by its whirring, excited by DVD ejections, and believes there is some kind of prey species inside it. 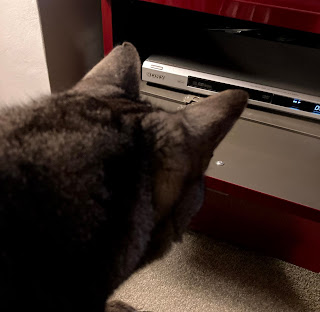