Felt a good deal brighter, and not exhausted when I woke up. A domestic day, where I made my first bean jar for some time. Felt great to be able to boil my beans, chop my onions and carrot, and add a few herbs from the garden to add to the parsley I had bought yesterday, and then have the bean jar, from Moulin Huet pottery, which they don't make any more, filling the place with a lovely aroma of slow cooking shin beef, haricot and butter beans, herbs and onions. Sam tried some too, carefully picking out the bits of meat. As they ate it, Sam and Lorraine kept discussing what the bean jar was a bit like, rather than focusing on the timeless glory of the bean jar itself. On the scale of my bean jars, this one was slightly above average, but not stellar.

In the afternoon, Lorraine and I drove up to the hill fort to scope out the foraging, and we ended up picking almost a kilo of berries. I had brought two left handed gardening gloves (you need your picking hand naked as God intended) and we got stuck in. A patch the far side of the course was particularly fruitful. Of course there was a cost: Lorraine's trousers got some picks, and she was bleeding from a scratch on the back of her leg, I was unscathed apart from a nettle sting on my arm. I was wearing light trousers, however, and the thorns had picked a hole in my plastic bag, and dribbled a splash of purple onto them. Three lots of people talking to us as we picked.

A new jam engine arrived today, a cooking thermometer. As soon as we got home we began washing the blackberries and employing our eagle eyes to remove a dozen small unidentified wrigglers.

We continued, with Lorraine reading instructions, with a sense of trepidation. Last time I made this jam (on my own) and it turned out runny. That jam has haunted me. This time, because of knowing the exact temperature, the end result was definitely firmer, but still not as firm as I'd like. The taste, however, was absolutely delicious.

A spot of Frasier then Match of the Day before bed. Chelsea comfortably beating Arsenal, always a pleasure, and Manchester United drawing at Southampton.

More of those black and white skies up on the hill fort today. 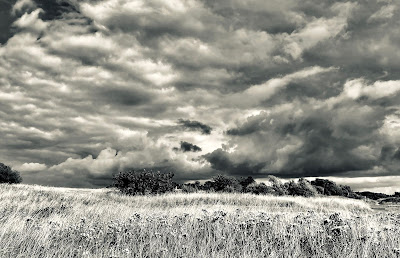