August 30, 2020
An expedition to the seaside near Beth this afternoon. Pat and Maureen had a good look around Beth's flat, Maureen loving it particularly. Amy at home, and getting ready to start school again like Lorraine, as she is a teacher.

Then we drove down to the seafront where Beth and I nipped off to Chippy Chips on Victoria Terrace, and ordered some bags of decent Fish and Chips.
I waited for them on the street outside, and then found everyone by the seaside in what was an archetypical English seaside scene, of a family fully clothed. The sea however was very still, despite the the fact that it was ridiculously cold for an August bank holiday.

Ate the fish and chips, staring aggressively at the gulls to prevent them getting ideas.

Lorraine snapped this before we went down to the beach. I took a snap of people eating fish and chips, but it did nobody any favours. Pat sporting my cap, which being a bit large for him, gave him a rather jaunty air I thought. 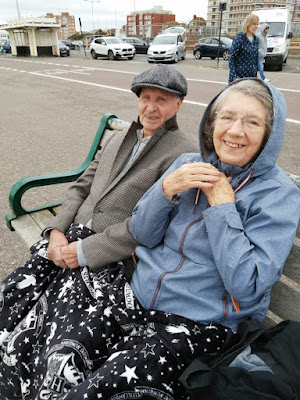