November 03, 2017
Friday. Up and off to work. Lorraine dropped me at the station and I ran up the stairs and, puffing, caught the train by the skin of my teeth. Off into town, via Hassocks. Reading the last few stories of Good Evening, Mrs Craven: the wartime stories of Mollie Panter-Downes as I am on a mission to finish the books I started during the year. These home front short stories are mini-masterpieces of English manners under duress.

To work, and the security badge I'd begrudgingly been given didn't work. I was sent down to IT where I was greeted unnecessarily grumpily. I gave them grumpy back with interest and it was soon sorted. The day panned out as usual, having to mind read what people wanted, due to the absence of briefing. A pleasant walk at lunch, though loping along in a tired way and my knee was hurting. In the afternoon the word programme on the laptop they've given me froze, and I lost three hours work despite all efforts to recover it.

Asked by the CD to go for a beer after work, sat with him and Richard, who it turns out has a passion for electronic music and has met Brian Eno, and Jean-Michel Jarre and other notables in the field. Robbie also there. Pleasant enough, but I really wanted to be home. Left early, having heard the call of the seagull, and arrived in Brighton shortly before nine. Raining, so a long time to get a cab. The Brighton cab I got at the station began to take me to Hove. I had to correct the driver several times, increasingly grumpily as it became clear he had no idea where he was going. After a while I noticed that although he was in a Brighton Cab, there was no meter. I asked him if he were actually a cab driver, and he assured me he was. When we arrived home, he asked me to pay what I normally paid, which I did. Some kind of taxi pirate but at least he had taken me home eventually.

Home then out to collect a curry from around the corner, that Lorraine had ordered. At last I was on the gold sofa with Lorraine, a curry, a pint of beer and all well with the world apart from the cats. Calliope ran outside the front door, which she is not supposed to do, and would not come in. Several times went to the door and saw her eyes gleaming at me from under a car parked outside our house.

I blame the full moon. To bed, after starting to watch The Fog, but we were too tired and the zombie pirates were scaring Lorraine.

Below The Garden of the Divine. 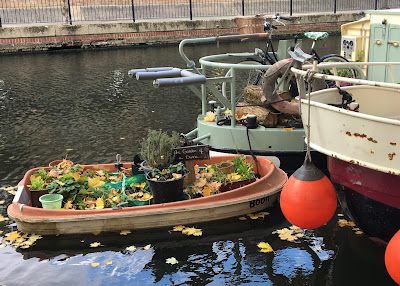