November 16, 2017
Kissed Lorraine near Preston Park station, then into London, reading. I had randomly picked up Canal Dreams by Iain Banks which I have carried in boxes from house to house for years. Now was the time I would finally read it. After 40 minutes I decided I hated it. The characters were cardboard, the writing useless and I didn't care what happened in this story, just as long as I didn't have to keep reading it. I gave it a good go though. Interesting how good writers can write terrible books sometimes, I googled it afterwards, and it seems that Banks thought it was his worst novel. I've only read the Wasp Factory, which while I thought was only okay, it was much better than this Canal Dreams. I had selected it based on my current spate of canal mooching.

Into work, and a reasonable pace of things today, rather than yesterday's machine-like slog. A walk at lunchtime, first to the Smiths in Paddington station and a futile search for something decent to read. Then I walked the opposite way down into the Paddington Basin. Here among the shiny new buildings, I found a temporary floating island, with planters of exotic long grass, and mats of plastic grass. From this I saw a shoal of small fish, almost certainly minnows. I found something weirdly joyful about the sight of the shoal moving slowly as one in the water, in the middle of a business area.

After work I went up to Stanmore and walked to Mum and Mas, then drove off to the Jolly Badger, Harvester again. Inexplicable traffic jam in Edgware, involving lots of buses blocking the road. Mum not at first realising all the stationary cars were gridlocked, queue jumped the whole lot. A tiny man came out of his car in front to remonstrate, but mum gave him a positively gallic shrug and he went away.

Harvester weirdly busy, and the Christmas decorations were out. Nearby, as we left, there was a dozen or so older folks some of them in paper hats. I had some kind of Caribbean chicken with rice and peas, with a vile and weird sauce with the consistency of vomit.  I'll stick to the chicken and chips next time. Home, and had a long and enjoyable chat with mum in the back room drinking wine, as machine gun sound effects came from the TV in the other room. Spoke to my lovely Lorraine on the phone, and I went to bed at around eleven. 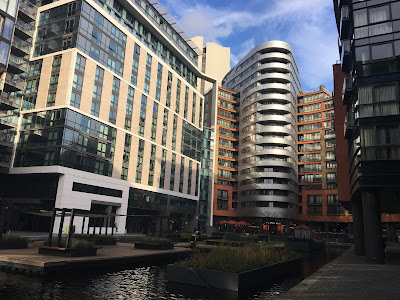