Into Vienna with Top Hat askew

November 29, 2017
Last day of the Summit meeting today. Downstairs to the breakfast room, scarfed a large breakfast, then hurried to the main room to be do the Voice of God, a good shepherd who advised people when to leave rooms and enter them, and did a few introductions to speakers. I did a fair amount of moving between floors to. As upstairs VOG I was more visible. After I made an announcement, one woman came up to me and said "I don't have any coffee." Sadly my powers to manifest a cup of coffee for her did not match that of the deity. As a team all the things that could have gone wrong did not go wrong, and the day was a success, should your tastes extend to dull, content-free corporate guff.

Huge relief once the event was wrapped, and clients pleased. Some time then spent tidying up the office room we had spent hours in, and then upstairs to freshen up and then assembled in the bar.

Finally then, at around eight, a chance to go out into Vienna. We went to an Italian restaurant, booze was drunk and some not bad food eaten.Then walked through the streets towards St Stephens Cathedral, which looked beautiful. We found a bar, which was full of people smoking, but it was too crammed. Instead we went to a hotel bar which overlooked the Cathedral, and had plenty of drinks there. Dan, who had been the soul of hard work, client pleasing diplomacy, began ordering shots and strawberry daiquiris with some abandon. Things got a bit lively as the drink and the sudden absence of stress after two weeks kicked in. Time to realise too what lovely people I had been working with. I had taken to them all, and they seem to genuinely like me too. An altogethery night. Outside, snow began to fall, lit up in the beams of light around the St Stephens.

Things grew steadily livelier. Maria, Den and Ashley wisely dropped out at this stage. Ash is an amazing powerhouse of a person, who worked like a dog over the last few days leading the team. But when the adrenaline dropped, she had to head home.  I went with the others in a cab to some species of a Viennese Hip Hop nightclub, which we entered being stamped on our hands with a spade from the card suits. As the evening wore on they seemed to be playing the same tune free beats endlessly. Met some our nice clients in there too. I danced, naturally, and drank another drink. Luckily at around three, and feeling tired, James, the art director sorted out a cab for me like a guardian angel. Sleepy as it slid through a Vienna still slightly snowing, with the streets slushy. I crept back into the hotel, top hat askew, at 3:30, and fell asleep like a giant redwood.

Below, in the Italian restaurant, my new friends Rimple, Ash, Finchy, Dan, James, Harriet, and Den. For some reason, Maria, who was sitting on my left, didn't make it into the photo. In the bar, Dan gathers some Strawberry Daiquiris, glimpses of the lovely Cathedral, a street scene, the smoky and trendy bar we went into that was too full, and a surprisingly arty snap of the nightclub, which was the Club Vie i Pee. 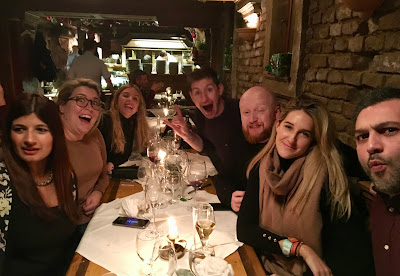 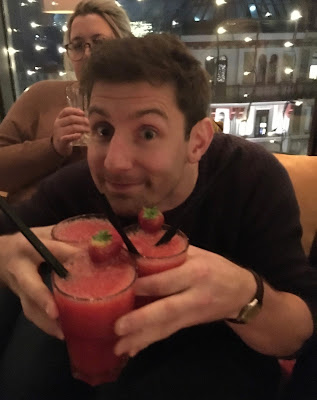 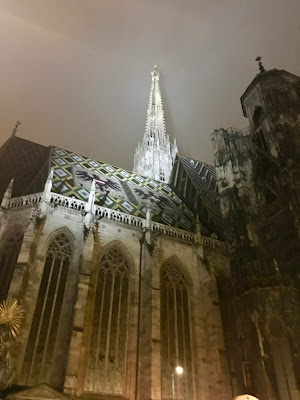 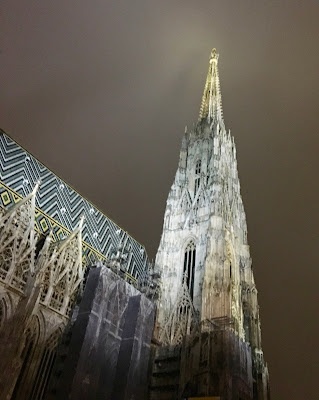 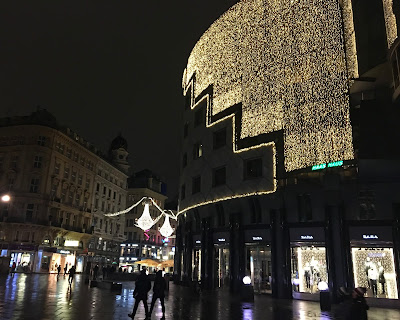 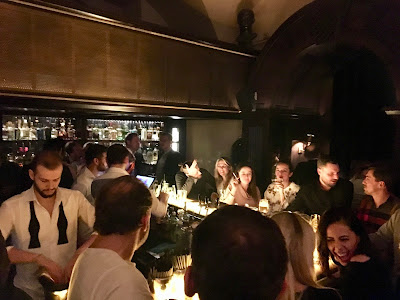 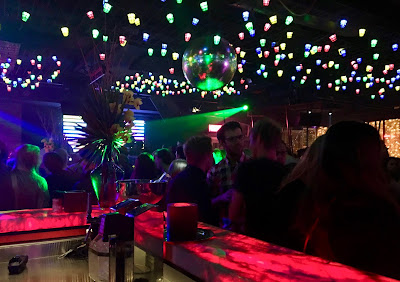