A sniff of spring

February 25, 2014
A better day, and reasonable progress on the book, despite discovering early on that I had missed the poetry meeting last night. Apologised to Robin who organised the workshop. The unexpected good news, however, is that I may have a poetry pamphlet in the offing later this year as Robin is starting up a wee press. More details when this emerges.

In other news spoke to a new contact called Stephen, who is trying to organise rehearsal spaces in Brighton. Otherwise tweaked Betty's poster for her show, spoke to Sophie while driving to her mother's house, who pinged over a Press Release for me to look at this evening. Also talked to carpet people who are coming around on Friday. Heard too from Guernsey exile Marilyn Chapman whose first book is now out as an e-book on Amazon here.

I did unmanacle myself from my desk to walk around the park for 50 mins nosing into the not so secret garden, and walking about in circles listening to a podcast about the Phoenicians a faint sniff of spring about things. Still not feeling perky enough for the gym yet, and cook a tasty tarragony chicken stew of my own devising which, as it had potatoes in it, was a hit with Lorraine who arrived exhausted from work post-ofsted in one of the school she looks after.

I watched some footy on the TV, Manchester United against a Greek team. United were beaten. I used to enjoy hating Mancheter United, but now they have become a shadow of themselves under their unfortunate new manager, I feel sorry for them.

Below the poster for Beth's dissertation piece to be performed in the college theatre. I knocked it up quickly but I hope it will have some standout pinned to the walls of the college. Beth and Emily are taking their show to the Brighton Fringe later this year. 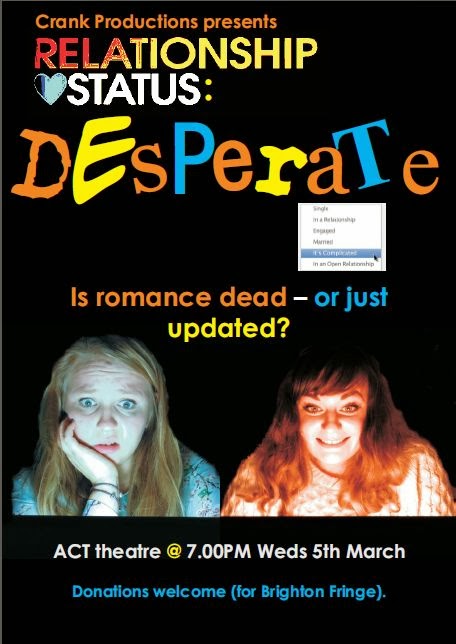