So a bit of a disrupted day... Sprang out of bed and then as Dan and Greg were coming later in the morning, and had to take the remaining pictures from the hall and rapidly clear my study. Don't deal well with sudden changes to the day, especially as I had quite a few things to sort out today.  Luckily Lorraine smoothed everything as she was working from home.

Greg brought his little dog too, who he put in the garden, but was whining so piteously there that our  neighbour Caroline complained. Meanwhile had a few chats with Robin, and got Jeremy to do a recording with me on Friday. Spent what remained of the morning doing a bit of my own writing, before commencing half a day's work for my  German clients. The brothers Greg and Dan done at three, and I went for a walk then, and came back to do some more work. Was contacted at a smidge before five asking if Keith and I could work for five days starting tomorrow. Quick chat with Keith and we yessed it.  Feeling a bit stressed about this, finally having sorted out a podcast interview, I will have to reschedule. Also had to finish the pesky German stuff this evening, rather than overnighting it as tomorrow would now be busy.

Beth around at tea time, and she and I had a good chat in the kitchen as I was cooking for me and Sam. Lorraine out with one of her pals for dinner but home early. After dinner I did some more work, and also sent an email to Rachel Boast.

The news coming out of Ukraine is still horrible, but the bravery of Ukrainians is awe inspiring. Meanwhile people in Russia are being fed Orwellian fake news... This is not a war, we are helping russian speakers in Ukraine, they are welcoming us and so on. They are masters at it. They have been pumping this stuff into facebook and other media outlets for years.

Meanwhile Chelsea are owned by the Russian oligarch Abramovich who is now trying to sell his assets in the UK before they are frozen. Chelsea being one of them. There is so much Russian money invested in the UK, including payment to the Conservative Party, that this is just the tip of the iceberg. Unless Chelsea somehow land on their feet, their days as a great footballing club may be fading. My grandparents lived in a house in Guernsey called Chelsea. I wonder what Dave, my grandfather would have made of it all.

Meanwhile a tribute to Val, someone I don't know whose passing was marked on the hill fort with flowers. 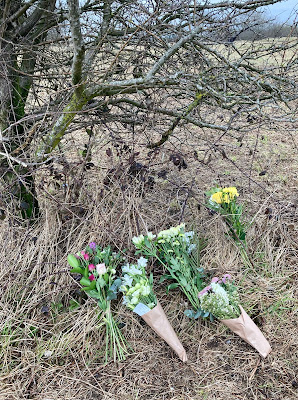