March 17, 2022
A day of cheery busyness: up early with Lorraine and waking Sam up x3 prior to his trip up to Scotland, tweaking the podcast and sending it to Robin for further tweakage. Then billing, timesheets, booking a dental appointment, a teams meeting with Keith and a nice woman called Amber we are working for next week, laundry, gym (baby steps still), talking to Val in Paris and then doing some work for her.
Also had two poems published in Black Nore Review and uploaded the new podcast episode. Matthew G. Rees new book arrived. I am a bit over-pleased that he quotes me on the back cover.
Carl called me. Lovely chat. Telling me about his poor little dog that was attacked by a savage dog and had to have one of its injured back legs removed. It gets about pretty well on three legs apparently, and is much improved, although Carl said it fell over when trying to cock a leg the other day. One of the things I like most about Carl is how he can laugh at bleakness.
Cooked chicken stew for me and Lorraine before she disappeared into a virtual Governor's meeting.
I went for a short walk under a low almost full moon, and then did French work till my brain balked at it.
Finally Lorraine finished, and we slumped on the sofa chatting for a bit before bed. Sam sent us a photo of him and Jade, having safely arrived.
In lieu of anything sensible, here is Calliope curled snugly into her desk tidy. 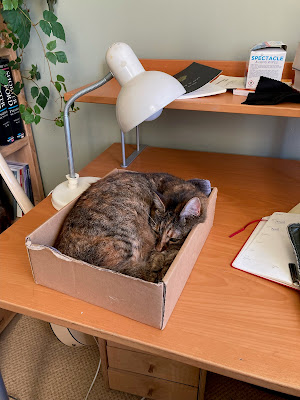