Of excellent dentists, outside beers and cycle paths

Up early and made several amends on the stuff I was doing for mes amis in Paris, and then sent this off as a pdf to Val. Then I nipped down to Preston Park Station and made off to Kew Bridge to see my dentist.

Amanda messaging me from NZ for the inside skinny on the Nintendo Switch games that Lorraine likes, as she has just got one too. Quite busy on the way up. I read poems from Finished Creatures, and the latest PN Review on the train for a while, but just felt like rubbernecking out of the window. I arrived a bit early at Kew Bridge so was able to sit by the river, and look at the flotillas of Canada geese and other riverside delights. A beautiful day. Sauntered up to the dentist's office and Lucinda herself opened the door and told me to go straight in, even though I was early. No nasty surprises, which is what you want, and just a bit of scraping and polishing.

As I was leaving I told Lucinda how much I appreciated how calm she made me feel over the years. I have not had a moment's real trepidation about the dentist over the years in stark contrast to the GPs I have spoken to. I said it was because I trusted her and she made everything very relaxed. She seemed very touched, and I noticed that I had brought a tear to her eye.

Then off on the train back to Clapham. Train chaos there, with lots of cancellations. There was only one train to Brighton, and I got on it. It was everything we have all been strenuously avoiding over the last year or so: crowded, several people without masks, two people walking along the aisle talking on phones without a mask. After Gatwick, the train was less busy, but there were quite a few people obviously holidaying in Brighton. I got off the train thinking that was the most dangerous situation I had been in since all this business started. Just have to trust to my double jab I suppose.

Home, and a few bits of bidness to take care of, and a chat with Anton before going with Sam to the Park View for a couple of beers. Nice chat about stuff, once we had worked out our strategy for where we were going next, as we had to leave the table after an hour. Eventually we found a place outside, in the Preston Park Tavern, where Lorraine and Betty joined us. We had a bite to eat (the prices significantly higher than before lockdown) and a brace more beers. I had a beef burger. It was great, and I was very hungry. Friendly woman from Toronto bringing our beers to the table. Sam trying to construct a joke around a bear and an eft (also known as a newt) and the punchline was to do with being bereft, Beth saying efts were too obscure and nobody knows what you are talking about. I think it has promise.

Then L and I went with Betty down to the cycle track in Preston Park, where James was warming up along with the other cyclists. We waved at him, then I nipped off to get some cold drink and chocolate, which I disgracefully ate. They were still all whizzing around, but James who had started well was now lagging somewhat, and was having a disappointing race. I liked the whoosh they made as the bunch of them passed. James retired, apparently gutted. Beth went to him, and they went home without us talking to him.

Lorraine and walked back home, and quietly watched a couple of episodes of the Golden Girls, before playing some massive chunes on the YouTubes, such as the immortal Boogie Oogie Oogie, by A Taste of Honey.

Below the view along Strand on the Green; Geese etc.; some of the exceedingly competitive cycling fraternity; and a selfie of myself as the Invisible Man. 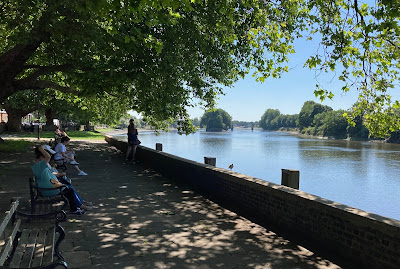 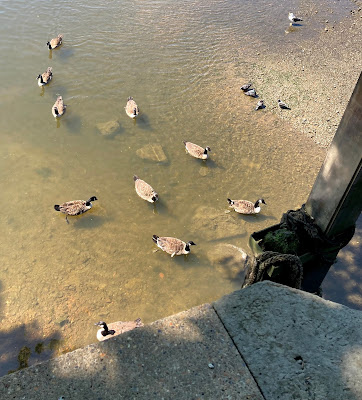 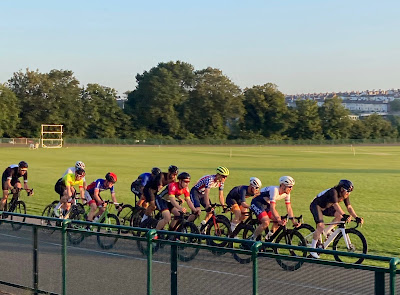 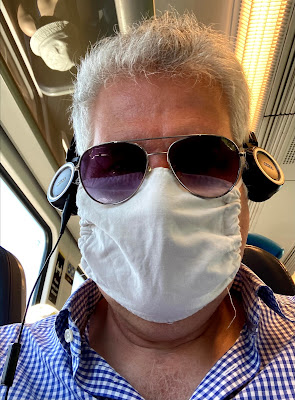