Rain but nevertheless off to Bolney village day on the green. Once we were over the downs it wasn't raining. I did my Dennis Thatcher/Prince Phillip impressions while trailing the VIP. Fun though, lots of dogs Lowry style, little stands, little fairylike children dancing around a maypole. We bought a very boozy Christmas cake, and I made small talk with folks about the weather and so on as Lorraine progressed around the place. Lorraine was working on a stall where people threw beanbags at piles of cans, which was fun. Next stand along Sarah and Dan had boules and we were chucking them at a stump with a hole in it, containing a tomato, and the aim was to explode the tomato. Despite my recent boule action I failed in this despite repeated attempts. We won two bottles of wine in the booze raffle too, cleverly going back late to discover there were few tickets but lots of bottles remaining.

Then home, and into a Cab off to Anton's place. Drank beer and ate beautiful lamb kebabs, and home-made icecream among other things, and we and Anne watched England play Ukraine.

Oskar arrived, and a fateful thing has happened. He is now taller than me. Felt a moment's awareness of the passing of time. It seems like no time at all that I was swinging him around by his ankles and now look at him. He could probably swing me around by mine.

They won 4-0 rather astonishingly and are through to the finals. Later we sat in the dark in the garden, where Anton's lights were on and it looked very pretty. He broke out his Aquavit, and wobbled my top hat somewhat. Home in a cab.

Below a hornet mimic hoverfly I spotted in Anton's garden; the general scene at Bolney with maypole dancers; a child throwing a beanbag. 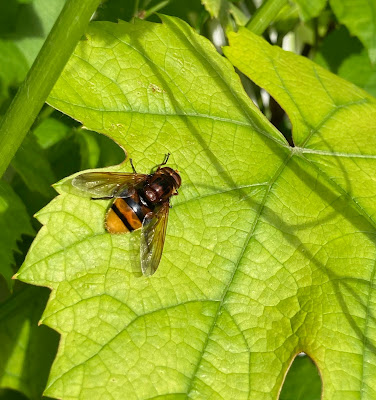 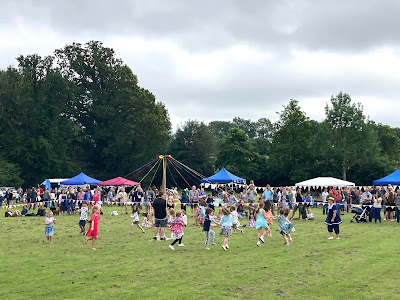 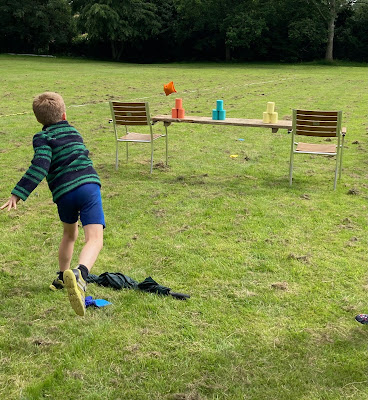