Friday... Waiting...  for meeting that didn't arrive till lunchtime.  When it came it was a complete re-brief.  The other two teams are not available next week: so Keith and I have three times the work, but half the time.  A gaping hole in the strategy which I pointed out in the briefing, so didn't win any popularity contests. But at least the new brief was based on thinking that we had done, so we have a good chance of getting it all sorted.

I had a short walk this morning. Still feeling underpowered, but definitely better than I was earlier in the week.

Read an atmospheric and claustrophobic short story by Hilaire after work. I sat briefly out in the Taverna sipping a beer after I had called Mum, who was okay, but busy and bogged down with little things. When Lorraine came home she ordered a Red Chilli curry, which I nipped around the corner to collect. Jade in London. Sam shooting things on screens upstairs.

Downstairs it was a bit of footie, and an ominous display by Italy, putting world #1 ranked team Belgium to the sword. Accompanied by the usual Italian feigning of injuries which is annoying. They expect them to win the competition. Early to bed, as both L and I tired this week.

Below, the next door cat monitoring me as I read. 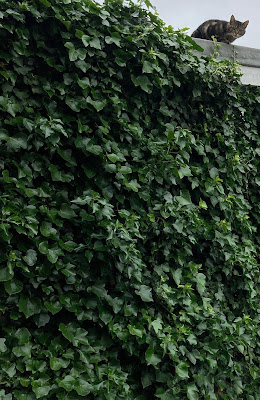