Lorraine and I had a nice afternoon. We whizzed over to Catherine and Tanya's house for some fizz with them and Guy and Tim for Catherine's birthday. We gave Catherine some cheese and cheese plates. Guy and Tim brought Catherine a trip to the circus. Guy told us that he and Tim had bought each other genetic testing kits, and found out they were both bog northern, with a touch of Irish. Guy surprised to learn that he had above average Neanderthal DNA too, finally dispelling his dreams of really being suavely French.

Then an amble down to the Giggling Squid followed by Brass Monkey ice creams, consumed int he cold outside. Excellent ice cream. I had a black sesame -- the first time I had ever had licked a black ice cream. It was nutty and nice. Spent lots of time chatting to Guy, who was telling me about the appalling journey he had to get a diagnosis and operation just a short time ago for an endocrine problem which has been blighting his life for the last seventeen years. Tim seeming in good spirits as ever. Catherine who is a complete renaissance woman retraining on programming languages, as her existing businesses, which were mainly face to face affairs, or funded by the university have been undermined by the current state of affairs. She is the embodiment of resilience however, and seems very positive about the next step. Tanya's indexing business doing well, and she has just been approached for a job with Penguin, which is excellent.

A quiet evening. Chatted with Toby, who is sadly flying home to Canada tomorrow morning.

Below Catherine and Tim, with a can of mad squirrel beer in the foreground we had just because of its name, Tanya and Guy, myself and Tanya, and Lorraine Tim and Guy. 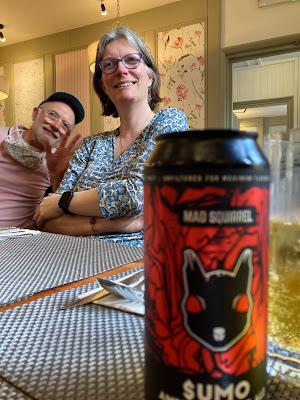 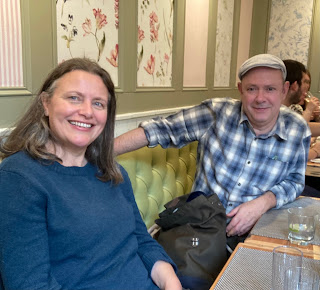 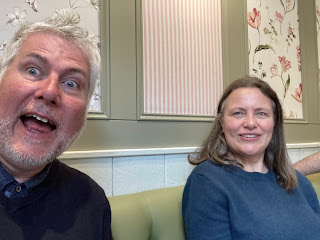 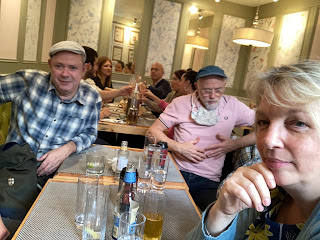 Catherine and Tanya Guy and Tim