A storm of wind and rain overnight.

The job that was mooted for next week definitely not happening now. Working through a list of to dos for Friday.  Was finally sent the log on details to my new business bank account (it has taken about a month) only to find someone had already taken funds out of it with a cheque.

I don't have a chequebook and so had to phone up the bank, and be passed from person to person for almost half an hour. Eventually I got through to the fraud department. After twenty seconds of talking to this bloke I was cut off. Repeat the process and finally, after well over half an hour I was refunded the money. It seems like it was a bank error, rather than someone trying to defraud me.

A lunchtime treat. I sauntered back down to the Open House and met Reuben for a bite to eat.  I had a vegan club sandwich which was incredibly filling, we also had a Guinness and cup of coffee. Just lovely to catch up. I hadn't had a proper chat with him for ages. Just as we were finishing I began to get a stabbing indigestion which seemed to continue off and on during the day. Much later the real reason revealed itself. I had tweaked my left pectoral when I was in the gym, and when I massaged a tender and painful spot, the pain melted away. And so endeth another ridiculously hypochondriac episode.

Then home, and I did a bit of writing, and began another complicated computer thing, regarding one of my email addresses.  I am normally perfectly able doing IT stuff, but I have had little luck with it in the last few weeks. Lorraine home in good time, with a clutch of four duck eggs she'd been given. Their colour is subtle, like the duck egg blue and duck egg green that the bottom of Spitfires and Hurricanes were painted in WW2.

In the evening off to Anton's in a cab. I stopped off at the Polski Sklep to buy some polish beers, and we had a splendid evening eating Anton's fine pizzas. He had found an ice cream maker that had never really been used, and so he experimented with passionfruit and mango sorbet. It was delicious. And exactly the lightness of touch you need after eating 32 pizzas. We saw Anne too, and my Godbairns. Klaudia off to the movies, and Oskar talking to us about his love of off road cycling.

A good time was had by all until Lorraine and I slid into a taxi and were spirited away. In truth Mrs Kenny had nipped off for a bit of a doze on Anton's sofa just before the end.

Below the master at work. Also featured a can of Polish beer and of course Anton being Anton he gave me the glass to match it. 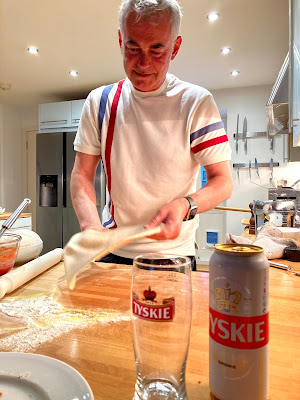 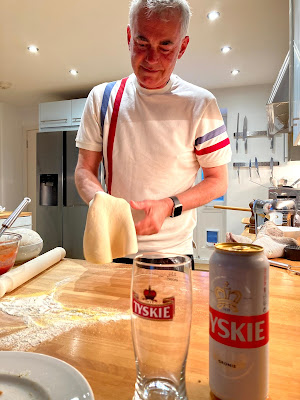