Beers with Mum and Mas plus Tanya and Robert

First day of May, and Lorraine and I up early, and heading north to The Waggon and Horses at Elstree to meet Mum and Mas for 12 noon. It would be for me my third day in a row of going to sit outside a pub.  Tanya and Robert came too, and we had drinks and food and it was all rather jolly if a bit nippy, with moments of rain.

Luckily the head chef who is veryfriendly with Mum and Mas, organised an outside heater to be put near Mas who wasn't wearing enough clothes. Tanya very kindly put her snood on his head, and also her gillet on his lap to keep him warm. She said she wasn't cold herself, but Lorraine said she was shivering at the end.

Lovely to see Mum and Mas, and Tanya and Robert too. Mas said he had been in touch with his son Brad, who is now a Trump supporter, which leads to a lively exchange of ideas. Robert scorning global warming in the cold, and saying Brexit will be good for the UK economy and that covid was no worse than flu in numbers now. He had been to hospital this morning, and was due another procedure in a few weeks. I simply drank my Guinness and counted my blessings. Mum gave a birthday present to Lorraine, and we gave Mum a blanket as a late birthday present too. Tanya gave Lorraine some earrings which was very kind of her.

We all had enough of sitting in the cold. I said to Mum and Mas that I would be back soon.  After the 17th of this month we will be able to mill about indoors with each other again, which will be excellent. With lots of folks there I didn't chat to mum in depth, although we have obviously been talking all the time on the computer.

We managed to get home in excellent time, and I went for a walk up to the Hillfort early evening. An evening in watching films on telly. All well with the world.

Here is a picture of Tanya and Robert, but Mum regrettably pulling faces instead of being sensible so there is no photo of her and Mas. 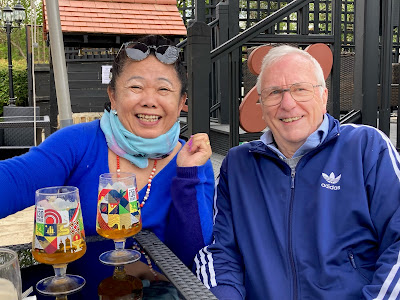 Mum and Mase Tanya and Robert The Waggon and Horses