A day, unbelievably, of two pubs.

Quite a bit of work and fiddling around with infernal things this morning. And possible new bit of freelance, but there are many rivers to be crossed first. I walked off to the Royal Sovereign on Preston Street where I went INTO a pub, and had a quick drink with glassmates, Adele, Ben, Rick around the corner, Kate and Fran. It turns out that it had been Adele's birthday recently, which had passed without me remembering. I felt a bit bad about this, as Adele is one of the kindest people I know.

The group ordered Thai food, but I just ordered some nachos with bits on them. Everyone's meal came except mine and eventually as we were all going I ended up having to cancel it and get a refund. However, I did enjoy two pints of  a local brewery's Casual Pale ale.

Then returned home and sent a few more emails, cooked for Sam and Lorraine, and went down to the Open House for  5.00 where we had a table booked. Nick already there, and Steve not long behind. And then Richard, who had been working today. A jolly reunion the first of us all since December. We were sat outside in the garden, ordering beer on phones. Our table well protected by an umbrella with a heater dangling from it, which was just as well as the air was soon rumbly with thunder, and there was an impressive downpour. The beermonsters drank beers and shot a good deal of breeze. A toast to Glen, the absent friend. Richard rather exercised by the control of the state through the pandemic, Nick amiable and cheerful, and Steve full of twinkly eyed charm. Richard's daughter Amelia, who I'd not seen for several years arrived with a musician boyfriend in tow. She is now 23 and an articulate and interesting person.

Back up the  hill and was home by 9:30. Jolly good to see those gents, and to feel today suddenly dropped back into the social thick of it. Home and my top hat still relatively vertical, ate some grub and made off to bed with my lovely wifey.

Below Steve and Nick, and then Nick and Richard and a smallish bit of me. 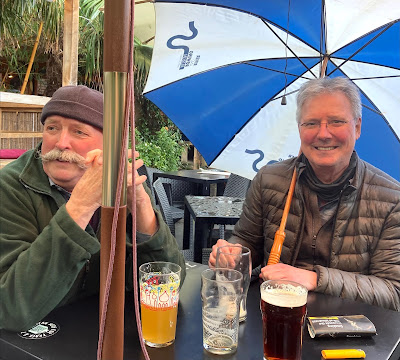 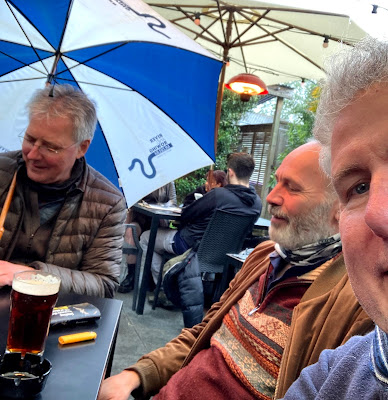