Carl's birthday today. I sent him a message via social meeja. Be lovely to see him over the top of a pint again one day.

A chat with Keith early this morning about business. Also had a long meeting with Robin about Planet Poetry, a bit of recording with her, but also about taking it up a notch. We think we have good content and are slowly getting better at what we are doing. I bought planetpoetrypodcast.com and we are going to set up a proper web page and so on. Struggling for focus when we were recording. I hate it when that happens.

In the afternoon, after a few bits of work. I went for a stroll to clear my head, and the sky was cloudy, and the sea dark blue grey but streaked with light.

In the evening, I interviewed John McCullough who is a lovely man and a poet I genuinely admire. A few stressful technical shenanigans first as he headphones mic set up didn't work, and there was glitchy sound in the recording which I will have to fix. But what he was saying was absolutely excellent. He even hates the idea of genius, which I do too and have written about. He says writing didn't come as naturally to him as it did others, but he has just worked really hard at learning the craft.

I used my actual camera which has a small zoom. The top snap is looking down over Hove towards Shoreham with the lump of the eastern part of the Isle of Wight clearly visible. I liked the streak of brightness beyond the slate colour of the sea under the clouds. 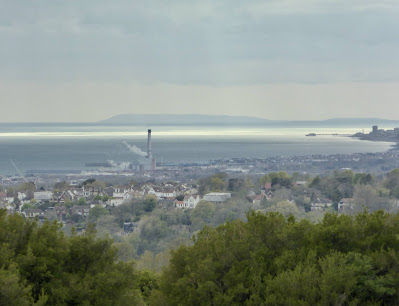 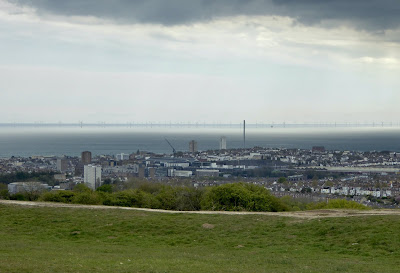