No beers today, and an iron resolve to get a grip on my diet as I am putting on a bit of weight again. I got up early with Lorraine, ate a sensible plate of porridge and wrote the first draft of a poem, which I feel is quite promising. Then I ate some frogs. This is a new learning from Jade: you eat your frogs early, so that the rest of the day seems fine. For me this was a bit of billing and redesigning my invoice not being a Ltd company any more and so on.

Then I went for a walk into town principally to buy a new watch battery. I went into a place in Churchill Square, who told me that I would have to leave them my watch, have it sent to the manufacturers and returned in a month. Instead I went to Timpsons and got it replaced on the spot.

Walked down to the sea for a while. Gorgeous day, the sea striped by clouds and bands of brightness, then home again. I ended the day on 13k paces.

Found out I had a poem called Mezquita de Córdoba accepted in Finished Creatures poetry magazine, which was rather nice. Based on the mosque Lorraine and I visited here.

Lorraine not home this evening, seeing Beth for a staff meeting. I simply read more of my Caste book by Isabel Wilkerson and watched several episodes of I May Destroy You. I have watched one or two of them over the last few months, but find it triggering. I think it is absolutely brilliant though.

Below the sea and a poster by the sea. 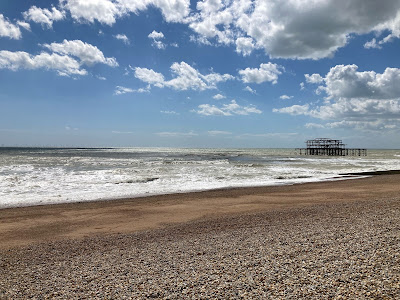 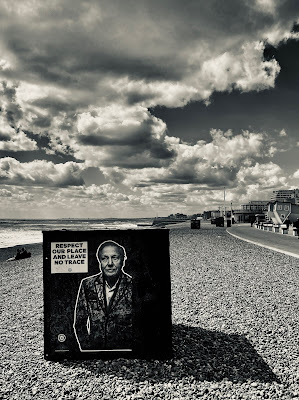 Brighton Finished Creatures I may destroy you Jade Timpsons