Lorraine back to school with some trepidation, having had a very stressful Friday. I have offered to help her do some admin type stuff to just take a few small bits off her shoulders. I wish I could do more.

I was up early and feeling rather inspired this morning. I spent the first few hours from 7:30 writing with gusto and enthusiasm, working on a few poems including the one I jotted down yesterday. Did some excellent work, even if I say so myself. Robin and I did some recording for the podcast this morning. Good to chat to her, and feeling positive about all of it.

After this, I started doing my books for the last financial year as part of folding up my business. Also received notification about  sole trading business account, but then had to complete a whole new load of forms as it does not appear with my other accounts on my internet banking. Really feeling the benefit of being with the same bank for 30 years. They are like blinking goldfish, with no memory of ever having interacted with you in the past.

Spent a good deal of time trying to sort out the web forwarding again, as what I did over the weekend did not work. Robin suggested I needed to enter some new information.  Also did a bit of editing on the interview I did with John McCullough. I found him very inspiring as a person. Unfortunately the edit is time consuming, as the sound levels are all over the place.

Snapped free of the desk manacles for a long walk this afternoon. Unusually I took only one uninspiring photo of some trees, but wandered off into Stanmer woods and back. Felt this to be rather a good therapy. Bumped into Jade who had been running. I was listening to the geopolitics book Anton made me read. Interesting stuff. 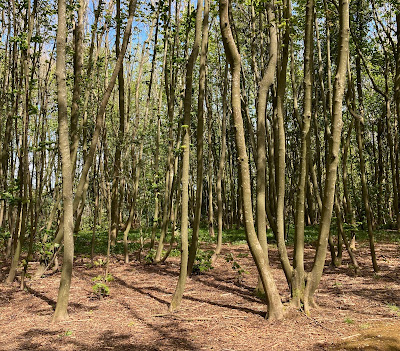