The Shahi at all costs

Up early, and got to work with Keith at 8:30. A bit of a slog for this early in the year. Tired by the end of the day. A couple of very brief walks in rubbish weather. In the late afternoon I had time to phone mum for a chat. In the evening, after Keith's Virgin had crashed again and I had faced the prospect of presenting alone to the Americans, all went fairly well. It makes me feel odd talking to Americans. A year on from last year's insurrection the BBC's Americast podcast was saying the majority of people who voted Republican last time, still believe that Trump won. Democracy in the US has been hanging by a thread. In fact sanity itself has been hanging by a thread. With QAnon and other conspiracies raging in the US, even down to our own Prime Minister telling  outright lies every time he opens his mouth, a sense of truth is hard to find. But for sentient Americans this must be an alarming time.

Done with the Americas at eight, I flew downhill to the Shahi to join the celebration for Anne's birthday. Lorraine already there with Anne, Anton, the Godbairns and Anna, who it was nice to see, not having spoken to her for months. Good to see everyone. Oskar now clearly taller than me, and Klaudia who will be 18 next month on the cusp of adulthood. Oskar will be 16 in April. Who knows where the time goes, as Sandy Denny once sang. Anton breaking his austere diet to have two halves of lager, and pick at a chicken tikka bhuna jal (a superior option in the Shahi).

Good to be in the Shahi again,  but the restaurant was entirely empty and again the sense that we were being hastened towards the door just after nine thirty.

Home and Lorraine and watched Gogglebox, which is a guilty pleasure. Sam out late having been waylaid by The Basketmakers.

Below Anne, Oskar and Klaudia, and workers on the road on the walk home with Lorraine. 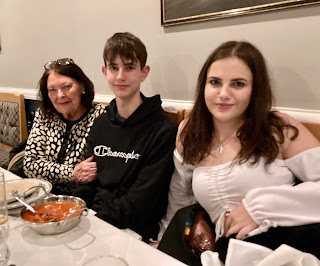 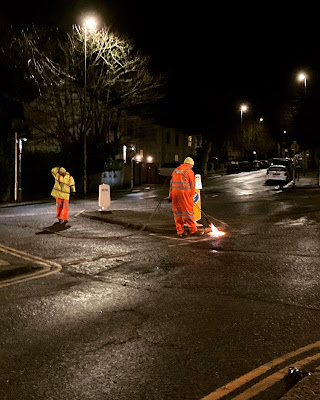