Back on the trail again

Monday and news of another effective vaccine from AstraZenica and Oxford University. This one also reaches 90% effectiveness if given in two doses. Being manufactured here, this is likely to be the one we'll get. Otherwise a fairly cheery day, I continued on with my new Diabolus in Musica story. Just need a nastier twist in it. I shall come up with something. Received a rejection (although polite and encouraging me to send more) for Doctor Spotlight. Gah. I think it is a good story, but Black Static seem to go for the more overt and gory. I already have somewhere else to send it in mind.

Went for three walks today, and smashed my 10k paces for the first time in over a week. Felt much better for it too. Watched lots of episodes of the WW2 week by week You Tube series that Anton talked about. Very good, and now Operation Barbarossa has started, pretty dreadful. It does give you the picture that half of the major events in warfare seems to pivot on human error, pigheadedness and cockups. I listened to episodes covering the invasion of Crete by the Germans. The British and Commonwealth forces who were there, were given detailed intelligence about where the Germans were going to land their paratroops, and that it was going to be a aircraft led invasion. But the local British commander ignored this and fixated on a sea invasion that never came. That and not having any working wireless sets led to allied defeat there.

All this made me think of my old pal Victor West, who was a POW captured on Crete. Had many a drink with Vic back in the 80s, and memories of his fighting alongside his comrades and life as a POW never really left him. He was a communist firebrand in his youth, and gave anti-fascist speeches and lectures while at the Führer's leisure. I have his book The Horses of Fallaise, and another book he gave me, not by him, which was a collection of The Lost Voices of WW1, which he signed with 'for services rendered', as I had tried to sift through some of his disorganised memoirs.

Had a chat with Kay, Lorraine's cousin, who was having a tough day and is worried about her brother who is having an op tomorrow, but soon cheered up. Also spoke to the Tobster, who apart from wishing to inflict violent death on Mum's idiot neighbour, was doing okay, and thinking of taking a sabbatical from his job next academic year.

Lorraine home, and we went out for a walk and a chat around Blaker's park before dinner. Mars, Saturn and Jupiter very visible at the moment. After some food and an episode of Death in Paradise, L had a long zoom meeting with the Friends of Bolney before retiring back to the gold sofa and a spot of cross stitch.

From near the hill fort, out to sea, and a coven of hawthorn trees. 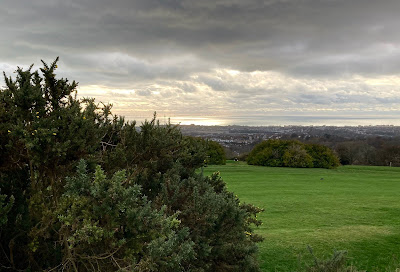 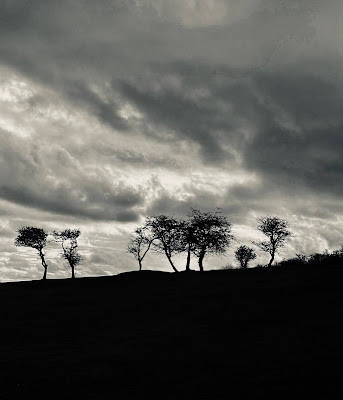