At The Jolly Badger

Up early and off to Edgware after I did some writing and a wee bit of stuff for the podcast. Turns out the people we have asked to concrete our front path were to start today. Nine o'clock, shortly before I had to leave, a bloke started hammering outside. The broken concrete path came up easily.

I walked down to Preston Park again, and trained it up to Mill Hill Broadway. The faux first train compartment offering me the opportunity to do some work up to St Pancras away from the hammering. Met with Mum and Mason at the Jolly Badger, which is a Harvester. Sam said yesterday to ask for the 'set' menu. There was a senior set there, including an 80th birthday party and one overworked waitress, who kept saying no worries. Mason seeming okay given the alarms early in the week. I had a rack of ribs, and two pints of Guinness. Chatted to Mum, reminding her that she was not alone and to ask for help if things get difficult. Mason able to wander off to kindly pay the bill, and of course talk to people on other tables.

A slow journey home, the train terminating prematurely at Three Bridges, and then the next train being cancelled. Sauntered back from Brighton station, across Preston Park, the sky looking threatening again, but with sunshine, and walked the planks to get into our front door.

John McCullough launching his new book Panic response today at Waterstones. I had wanted to go, but the event was sold out. Robin and Antony were going, and Antony kindly offered me a ticket, but by then it was a bit too late.

Cooked. And enjoyed not being on trains. An early night, Lorraine having had a particularly difficult day, but calling Maureen to wish her a happy birthday. Mum gave me a wee pressie for Maureen too.

Below the terracotta clock tower in Preston Park, which has been there since 1891. Just googled it, and apparently there is a moralising Victorian engraving on it: "Here I stand with all my might/To tell the hours by day and night/Therefore example take by me/And serve thy God as I serve thee" to tell us to serve God around the clock. 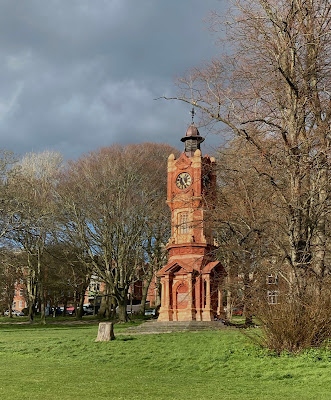