Now that the schools are going back, the weather was warm and sunny. After Lorraine had eaten breakfast with Sam, I went off a-foraging. Armed with Tupperware, I went to the first of the places I identified the day before -- but did not need to go further afield, as I managed to get just over a kilo of blackberries from the first of my sites. Blackberries accomplished I found the crab apple tree on the side of the hill, and picked up early fallen but fine apples. Their sourness shrivels your face into a repulsive puckering but they are bursting with apple flavour.

Walking home I thought how a small but judicious addition or small crab apple pieces would add not only pectin, but a welcome note of tartness to the sweet niceness of the blackberry. This would be a jam that didn't mutter hi to you as you ate it, but bellow a full blown Howdy! on your tastebuds.

As I approached home, I noticed how tingly my hands were with all the nettle stings on my hands, not to mention lodged fragments of bramble thorn.  Lorraine industrious and busy sterilising jars and scanning the berries for fauna (a spider and two woodlice) and together we made the jam. It tastes marvellous and had set well. I felt ridiculously proud of it.

I caught up with Mum, boasting about jam and so on and talking about the ways of cats.

Sam, Lorraine and I off to the Giggling Squid in the Lanes, to meet her old friends Rachel and Andrew. Rachel had surprised us with a message that they would be in Brighton, yesterday. I also met Hattie, who is studying medicine, and Libby who is studying Education and Psychology again. Cheery, clever girls.

Rachel, who I have only met a few times, is very nice. She also taught Sam when he was a little boy. Andrew has retired, and is 57, which is a nice situation to be in. He was kindly inviting us to come and stay with them near Cambridge. Pleasant food in the Giggling Squid, but by thunder the prices have rocketed since I was last there. Great to taste some Thai food though.

We jumped in a cab, and were home early (as Rachel and Andrew had a long drive ahead) and we watched a few Frasiers before bedtime.

Below... With just the fruit in, then with the fruit and the sugar bubbling up, and Lorraine with the resulting five jars of Hillfort Howdy. 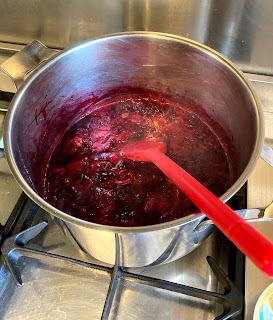 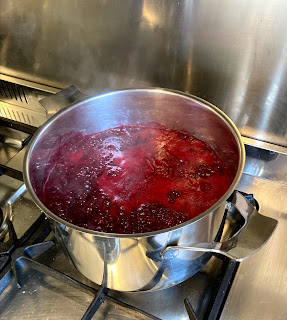 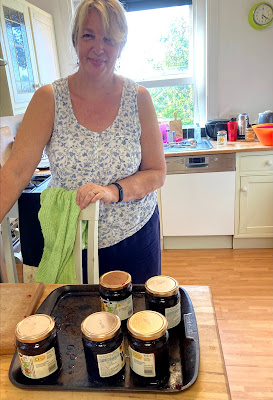