Going gently into the weekend

Slept in a little this morning. Heard the door click downstairs as Lorraine left for school and discovered a hot cup of tea my lovely had left for me.

Up and tinkering with poems. Decided I wasn't in any kind of mood to do work of any kind today apart from brood over my poems and read poetry journals. Went off to the park at 10:30 at met up with Francis, Ben and Rick around the corner for a cup of coffee in the rotunda cafe. Nice to chat and get out. Still overcast and degrees colder than Lorraine was just a few miles north. Francis gave me a poem she wrote in the seventies to read. Rick around the corner said he had problems with animals burrowing under his house -- probably foxes. A man was going to come and deal with them. Ben showed us a little circular pane of glass on which he had replicated the painting of a bird on a cherry branch.

Home again, and I spoke to Sonia for ages, she showed me lots of photos of beautiful Bulgaria, and recommended Peacehaven as a place to live, and was beginning to be wistful about Blighty now that she was moving back to Bulgaria with her Husband. I am going to miss her. Her last week next week.

I went for a long walk this afternoon, and then went into the back garden to read Poetry Nation Review -- and found it contained a fair degree of pomposity in it. Lorraine home, and as Sam and Jade were out we ordered our traditional Friday night curry, and watched the opening game of the European Football cup, delayed from last year. Italy vs Turkey. Italy proving to be rather silky looking and overcame the Turks three nil.

Below, Steven the Seagull from a few doors down with a beakful; and myself, Ben, Francis and Rick around the corner outside the Rotunda cafe. 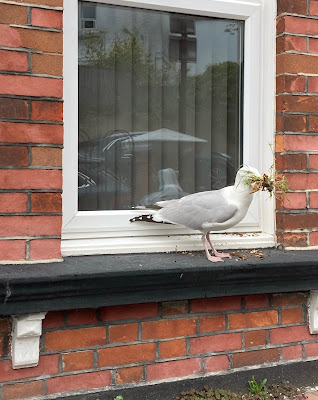 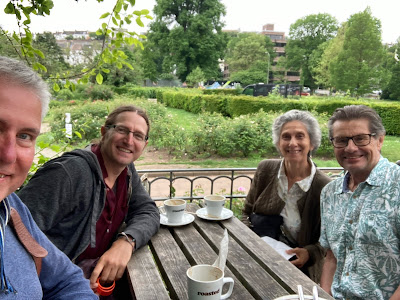 Ben Rick around the corner