A glimpse of London

Up and off to see Mum and Mas today. Down to Preston Park station to catch the the 9:29 train this morning. Was surprised that the nice man from the Daily Grind stall remembered my tea order after all this time. The power rail arced menacingly shortly before the train drew in, and a Kiwi guy and I standing near it were startled.

An easy train ride. Near-empty train, and I changed at West Hampstead, so I could stand outside. Then to Mill Hill and I walked from there, popping into Tesco to buy some bits and pieces to eat. We had some lunch, and talked about things.  Apart from Mum choking on nothing, and Mas a bit uncertain on his feet thanks to a bad back. Listened to music on mum's iPad, including Mahler, and when I started to walk back to Mill Hill in the late afternoon, Mum walked alongside for a bit and I playing her Africa Speaks, America Answers on Spotify. Mum and Gerald had this album when  Toby and I were kids.

Caught the train at Mill Hill, and got to West Hampstead again, but the train had been cancelled, so I travelled to Blackfriars to wait for the train there. I enjoyed looking out over the river at London sparkling in the sun.

The Brighton train when it came was busy, and although people weren't sitting immediately next to one another, if felt too busy for comfort. The trains are terrible for working in, as I was trying to read stuff for the podcast and make some notes but there are no tables or anything useful. Instead I sucked sherbet lemons from Salisbury and made a few notes on my phone. Lorraine called when I was on my way home, and collected me from Preston Park. I enjoyed the sensation of being one of those blokes who gets picked up by their wives from the station.

Jade had cooked a strangely delicious hot salad which had pomegranate in it. We all sat outside in the sun and then crept in later to watch France V Germany. One nil, with two disallowed goals.

Shots through the window at Blackfriars station at London's increasingly eccentric collection of buildings. 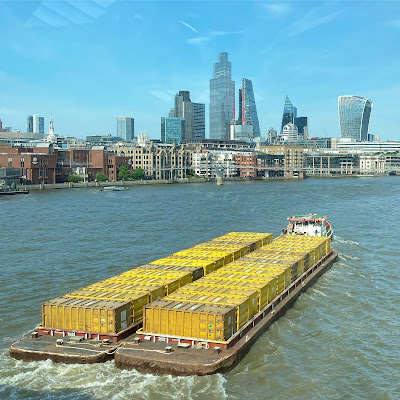 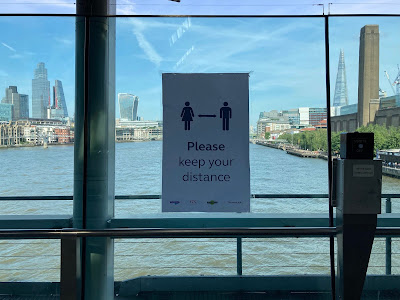 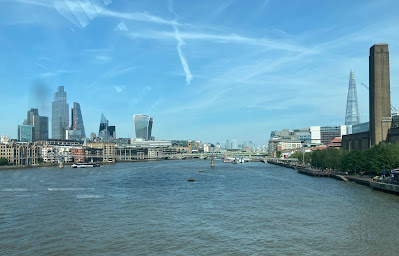