Poetry at the South Bank

January 14, 2018
Got out of the wrong side of the bed this morning, and felt strangely grumpy all day, despite having lots of nice things to do. I phoned mum, and then got dressed.

Lorraine and I walked down to Cote for lunch.  Lucky Lorraine had to endure a bout of me moaning about my lack of success in poetry and writing and so on. The usual litany of January stuff from me. However my lovely wife had helped me sort my head out by the time we reached the restaurant. Problem is when I have a large moan I feel much better very quickly, but make everyone else feel horrid. Nevertheless we met Catherine and Tanya, and Guy and Tim. Interesting chats with everyone, including Tanya, who is a big fan of visual art. Was approached by old friend and colleague Spooner too as I ate.

Then Lorraine and I grabbed a cab, so I could get home in time to be picked up by Robin to go to the T.S.Eliot award readings. A tricky journey as part of the motorway was closed. However we managed to get to the South Bank in good time.

A few familiar faces, at 'the poet's AGM' again hosted by Ian McMillan, including Lucy, from Matty boy's agency, attending her first TSEs with a friend. Robin and I sat with Rishi Dastidar and Pete Reynard of Proletarian Poetry to whom Robin had sold two tickets. As ever, the readings were interesting. The best readers were Tara Bergin, Caroline Bird, and Jacqueline Saphra, the most unusual was Ocean Vuong, who read with a bit of a Michael Jackson voice. Douglas Dunn, a bit of a grand old man of verse was also shortlisted.

Robin and I didn't hang around chatting, but she drove me home again, luckily the journey much easier this time. Had some good conversations about poetry and life in general while we were driving. Home at 11:30, and after eating a slice of bread, crept into bed beside Lorraine.

Below part of the mobs of poets and poetry readers. Robin and I attempt a selfie. 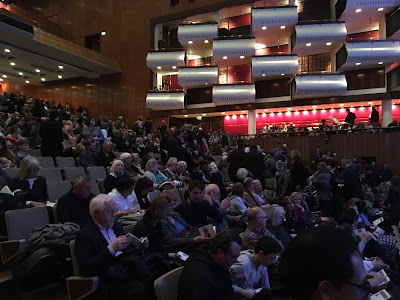 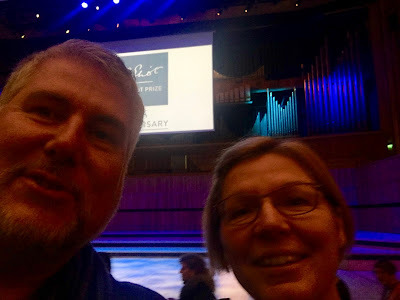