January 02, 2018
Last day before work drags Lorraine and I off in different directions. So we spent it together zooming about in the teeming rain. We were on a mission to look at wardrobes and a chest of drawers. We went to dozens of places, some far out of town. One place attached to a cattery, which was very bizarre. A small raised pond with enormous koi in it, which momentarily transfixed me. Driving over the downs home, through enormous puddles and the hilltops lost in mist.

Went to one new store, which had rather nice furniture. Here we met Dylan's mum Sophie, and had a good chat with her. Young Dylan doing well, and I was very pleased to hear that. Lorraine and I lurking so long in the shop that we were brought coffee.

Later, however, we bought a sturdy and newish chest of drawers from a charity shop, and then drove to someone's house on the edge of town and paid a deposit on a lovely wardrobe we will collect on Friday. Wondering if the wardrobe people were Narnian fauns, but I was disappointed to find they weren't. We were fairly pleased with ourselves.

On our travels we had popped into seeing Beth for a cup of tea. John's dad is in hospital, so he's in London with him, poor lad. So Beth was on her own, so we invited her over for a roast dinner, which felt like the last indulgence of the festive period. We all played scrabble, and drank some beer. Me rather more than the others.

High winds tonight, from Storm Elenor, to spice the ceaseless rain. I like how they have names now.

Below are they shy or just a bit koi? 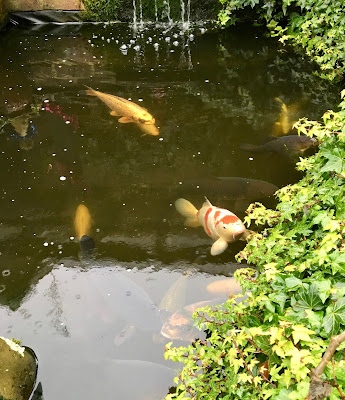