A circle of green glass

January 26, 2018
Up early and did some billing and emails before I got the bus (being late) off to the Evolution Arts place for the Stained Glass window course. Making slow progress. Ben the likeable guy who runs the course tends to be reactive rather than proactive, so you have to ask for help. Some are far more insistent and doing so than me, which makes me feel a bit irritable. Still I managed to cut a fairly circular piece of green glass. I want to get the most out of the course, so I have to alter my approach and be prepared to be more of a 'pane' in class. Arf!

All confirmed for a few days next week working with Fernanda.

I had packed my bag with my computer and so on so I could start work in a cafe shortly after. Frustratingly I packed everything except my wallet. Chris, who I had a coffee with last week, stood me a coffee, and we had a fairly good chat, then I bussed home again, picked up my wallet, had a quick chat with Sonia, and walked back into town. I worked in Starbucks looking at my Sin Cycle poems in the light of Charlotte and Robin's feedback, which is actually helping me see the wood for the trees.

Then I walked home as Lorraine, was home early for her after the conference. She did a bit more work, and I did a bit more tweaking in my study, then we went off very early to the Preston Park Tavern for a spot of grub, and a couple of beers.  Lorraine really up and motivated after hearing inspiring speakers at the conference.

Then home very early for a cylon fest, not having seen Battlestar Galactica for two nights.

Below, our first practice piece, assembling the bits I have cut. I still have to cut slithers off the lead, solder it and then cement it in place, but you can sort of see what it is supposed to be. 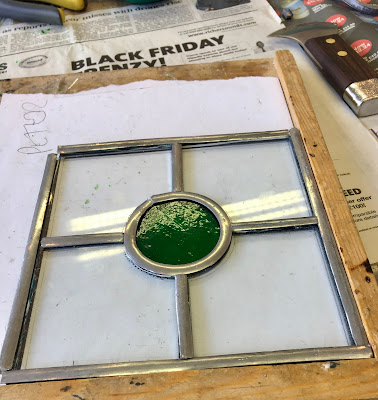