October 04, 2017
Up early and working on poems. Back to the gym fairly early, then to Starbucks, but couldn't settle there to work. Home, via Sainsbury's. I also did more work and more scraping. In the evening I walked down to see Anton at the Joker, where we had woof woof wings to line our stomachs, and from there we decided to go off piste, to a pleasant time warp of a pub on Baker Street, called The Mitre, where I had a glass of mild and felt like I was drinking in a pub that had been untouched by time, apart from people looking at their phones and iPads. Then a hundred yards on to The Druid's Arms, where we left quickly as there was nothing to see there. Next we drank a beer in The Great Eastern, and then decided to go to The Green Door Store, which is a music venue under the railway arches which Anton has haunted quite a bit, and I never have. I followed Anton sidling into the stage room, all shiny brick and a solitary doorframe standing in the floor where a small room would have been, the band were doing a sound test. Soon they started charging folks and stamping the hands of folks to come in, so we had managed by the powers of looking old and unchallengeable, to get in free. The band I think were called Meat Meat Meat, and were extremely loud indie rock. I had my fingers in my ears, and although they weren't terrible (they had a good crowd too) we left.

But only back to the Prince Albert pub, where there was a band playing. It was £3 entry, but Anton could only find £4 in his pocket and blagged us in. The band were anonymous, and at least not far too loud. After watching these for a bit, we simply went home, top hats slightly askew. I had phoned Lorraine during the night, with Anton taking the phone and shouting, "I love you Lozza, I've always loved you Lozza."

I arrived home safely, and sat on the gold sofa with a large glass of water, turned the TV on and fell asleep. Only to wake up an hour later and shuffle off to bed.

Below: inside the Green Door Store. 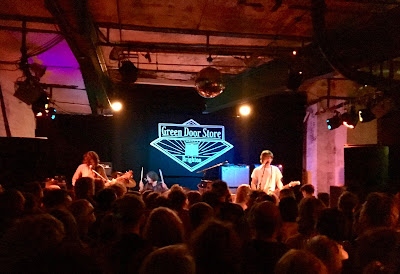