October 19, 2017
Properly hung over this morning. Went downstairs and discovered I was standing a few inches away from a dried up frog, brought in by one of the cats, probably Brian. Spent time clearing the scraped off wallpaper out of the big bedroom, although bending down repeatedly set my head throbbing. I don't think the dust agrees with me, making my sinuses sore straight after.

Otherwise, a quiet day. I had send lots of information off to Paddington. Ended up having to take photographs of the documents and then turn them into PDFs, rather than simply scanning them as which took a ridiculously long time.

Today the person whose bicycle had been left on the road turned up. Lorraine's hairdresser Paul had put a message on a Brighton community page. The owner lived at number 111 on our road, and as we are 11 it was a bit strange. The thief had obviously cut through the lock, then cycled it a hundred yards or so and then got off it. Weird, and annoying.

Lorraine home late, so we made off to the Red Chillies, and purchased a nice takeaway. She has one more day before she breaks up for half term. This, obviously, is when my work starts in Paddington, which is a shame. We crossed the road to the Park View and Lorraine had a much needed beer. I had a medicinal half a Harveys. In the evening I put an ironic post about the Peter Kenny World Poetry Tour, consisting in a reading in Brighton, followed by a reading in London. Kev, my old University friend, posted a picture of this teeshirt. 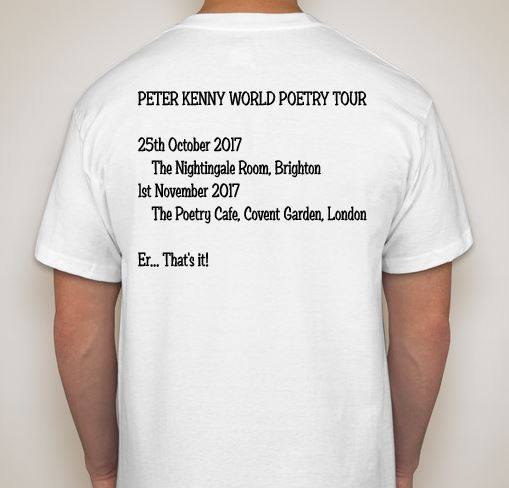