Heading for the hills

Heard from Carl this morning that Jayne was in hospital with Covid. I spoke to him during the day, and it seems she had another infection. It wasn't anything to do with lungs, so that's good I guess. He has covid too, but fairly mildly having been vaccinated.

Leaving the cats in the capable hands of Sam and Jade, Lorraine and I made off to see Sue and John. Into the car first thing, and drove off. A free and easy drive, which we both enjoyed, stopping for tea and sandwiches at a service station. Saw dozens of red kites from the M6, I'd never seen so many of them. Lovely impressive raptors.  The feeling of escaping from Brighton was excellent, as I have been feeling a bit hemmed in and fed up lately.

Arrived at Sue and John's while it was still light. A nice cuppa and some Christmas cake. Whiskey the dog, sporting her Irish tricolour collar, springing about enthusiastically as Sue told us Whiskey now has an Irish passport. Lorraine and Sue went off to get eggs from a farm, and John and I put the world to rights, looking at his wood burning fire. When the ladies returned, John and I set off into Bromyard, prettily lit by Christmas decorations, and went to the far coop to buy some beers. Walking back he showed me a tudor looking building that Charles I hid in for a night.

A cheery night. I phoned Mum, and spoke to Anton and Carl and swapped messages with Toby. Carl said Jayne was improving, and he was okay. We sat down to an amazing meal, which included goose. I don't remember eating a goose before. Very different to turkey meat obviously.  John took a call from his son in Australia just as he started carving, so I took over and found that the flesh was quite thin over the bones. Still, very tasty. We were all very tired, and just managed to survive till midnight before hurrying off to bed.

So farewell 2021. A very mixed year, where almost everyone faced difficulties and constant strain. The onus for me too was on survival, rather than any great achievement. But he people I love are still okay which is by far the main thing. And after a financially diabolical 2020 this year was vastly better and the Kenny coffers have doubloons in them again.

Below heading for the hills... A glimpse of the mendips from the car 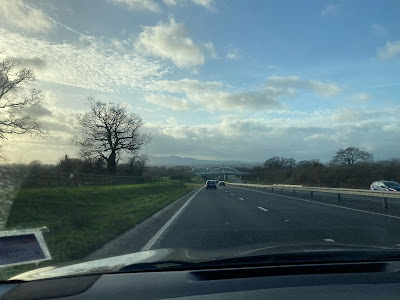