Off colour and coughing this morning. Hard to separate the hypochondria from reality. I returned a dab of poo through the post to the bowel screening folks. It seems rude really.

Keith and I started what was supposed to be seven days work with Americans this afternoon. The job was only confirmed at noon, and we were given a briefing late afternoon, on a particularly depressing medical matter. We were asked to reconvene at 10pm and where -- announced as good news -- the project was biffed till January. Somewhat galling as we had both put off other work to do this project. Business dealings in the last week or so are chaotic.

Lorraine at home, and officially off sick. She did, however, conduct a Governor's meeting from bed this evening, where it was officially confirmed she was going to finish in the summer. Otherwise she seems a mite brighter today. Sam prepping his trip up to Scotland tomorrow, and went out shopping and bought Lorraine chocolate and treats.

I uploaded the new episode of Planet Poetry. Quite a chatty episode this time, with a good interview with Alireza Abiz in it.

While Lorraine was in her meeting, I watched a documentary about Donald Trump's unhinged foreign policy. The man was (and is) such an unbelievable danger to the world. 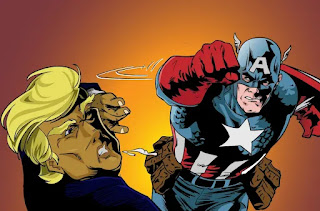