A long stroll with Anton

A smidgeon of morning's business concluded, then a long walk with Anton, meeting him at his house, and them walking westward before doubling back along the seafront. From there we walked Eastwards to be level with the Marina. Then we started a long pub crawl, stopping off at many pubs over many hours. Our saving grace was that in each we confined ourselves to a half.  At the St James pub we had a chicken wrap, and then drifting through town talking to assorted bar owning or serving folks as we did so. Cheerful to be ambling along chatting about everything and nothing. Anton telling me about a TV series called Comrade Detective which is filmed in Bulgaria, and is overdubbed by US actors.

Fond farewells with Anton, outside the Shakey Head. I had walked 28,352 paces by the end of the day.

I walked home feeling good, and Lorraine, who had just finished work, ordered a curry. This was delayed somewhat so I went to the Park View, where I met Sam for a probably unnecessarary extra beer, then we picked up the curry and returned home. Lorraine now on a break for a week, which is great news.

Some strange snaps along the way. Rubbish. There has been a dispute with the recycling and rubbish folks in Brighton, which has resulted in huge piles of stinking rubbish on the street. Apparently the problem is now resolved, but there is loads of mess to be sorted out. A postbox wearing wooly halloween garb, and picture of the i360 from below in glorious black and white, and a fading stencil of what it means to be a Brightonian -- a creative fun-loving person who cares -- bringing a positive change apparently. Sounds about right. 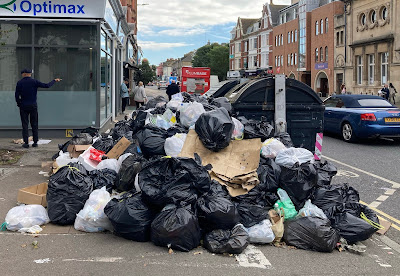 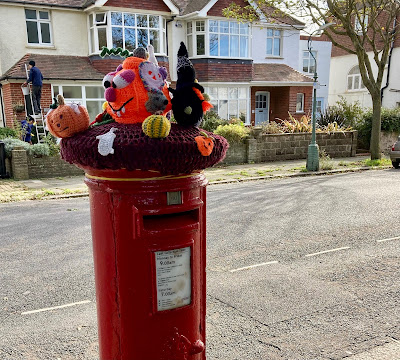 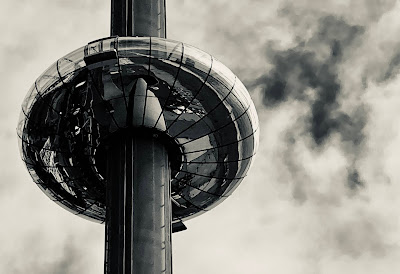 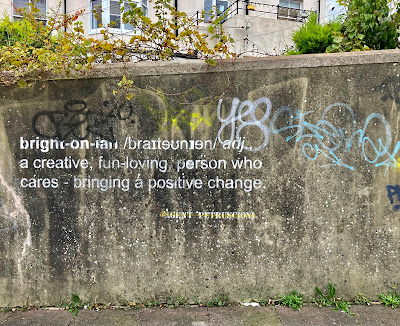