Sunlight breaks into my office

February 05, 2018
Somehow twisted my neck which set off referred pain into my head. Got up in the middle of the night and microwaved the bean filled bag that Maureen gave me, to drape like a heavy slug over my neck. I spent much of the day be-slugged while I worked on Sin Cycle. Now I have Sarah's comments too, I am now making my final tweaks. Weirdly, there are several parallels with Songs of Innocence and Experience which I haven't read for years, although one of my poems is a reworking of an old poem of mine inspired by The Sick Rose, a picture of the Blake's engraving which I posted yesterday.

Otherwise a quiet day, and Lorraine working late. Maureen phoned me up to talk about curtains. She said I wouldn't understand it but she told me anyway. Glenice phoned to thank Lorraine for birthday flowers. Meanwhile I did my 10k paces in three walks. Not snowing in Brighton as it was in much of the country, but there were occasional odd sleety or snowflake in the air but nothing with any gusto, and bright sun from time to time too.

A bit worn out by my painful head by the end of the day, and binged on episodes of BoJack Horseman  again, which is as sad as it is funny. Lorraine home, and once fed, we watched another Battlestar Galactica episode before bed.

Below glimpsing the downs on my walk. I had half expected them to be white with snow, but obviously they weren't. Also as I worked late this afternoon, low, orange sunlight came into my study for the first time. The sun getting a mite higher and moving west. Strangely lovely. 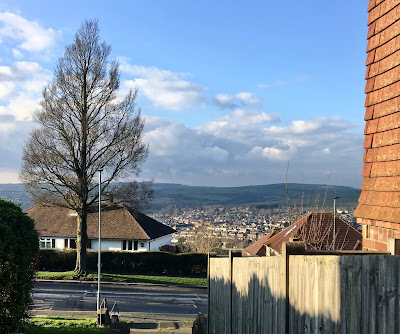 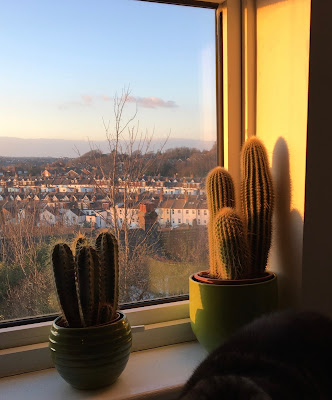