Slipping off to nowhere

February 27, 2018
Another exhausting night of coughing and feeling positively ill again. The world white this morning, as the 'beast from the east' had delivered a thin blanket of snow in Brighton for breakfast. More like the Lapdog from Lapland. Lorraine up early to go to school, but due to the snow and ice, and the steep camber on the road meant she was unable to escape and had to abandon her car touching a neighbours. She left a note on it, and a bit later, another neighbour showed up having run into the back of her. Everyone involved teachers and no harm done. Later she was able to drive off the car, and park it nearby.

I got up early and finished a certain amount of the French work, sent them what I had (several concepts) and told them I was too ill to continue. I heard nothing from them afterwards so have no idea how this went down, fretting a bit about this. But spent the rest of the day dozing or lying on the gold sofa and really happy Lorraine was at home, and looking after me nicely. She cooked a quorn shepherd's pie tonight with loads of healthy vegetables. Vitamins to the rescue.

Anton popped in briefly to get a paper signed, wearing his white coat and looking like he was about to take Stalingrad.

Below the situation first thing this morning. More snow followed, falling in thick clumpy flakes, and for a time around midday it was lying quite deeply. But this is earlier, the kitchen window view, and from the big bedroom at the front, where you can see Lorraine's car temporarily parked in the middle of the street. 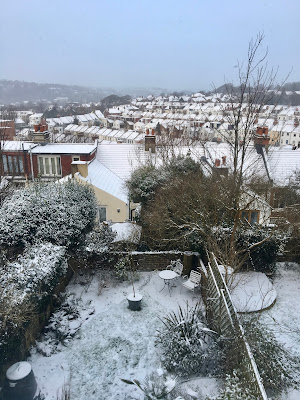 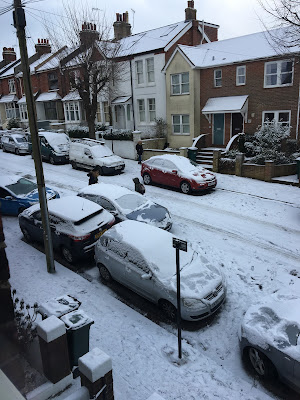 Anton Brighton snow The Beast from the East