Up early and rushing about straightening the house for the open house day. Then nabbing Calliope and taking her to the vet, paid for more thyroid stuff and another blood test.Very pricey. She is not putting on any weight. The vet hinted at other issues.

Home and a frenzy of tidying, and then I showed the lady from the estate agent around. Sam, after quite a bit to drink last night, being extremely helpful, but he found having to rush off stressful. He went to stay with Beth for the day.

Lorraine and I went to the tip to drop off some rubbish. Also a few unsold Clameur CDs. We were quizzed about these, was it a business thing? Were we dumping commercial waste. But it was all okay thanks to Lorraine's persuasive charms.

Then back to Osborne Road to drop the car off and we went to a nearby cafe, Tilt, and we enjoyed a vegetarian brunch and looked at houses on our phones and made another appointment in Seaford.

Mooched down to London Road station to catch the train, and once in Seaford stopped off at the Crypt gallery to chat to Adele who was showing some stained glass. Then we had a bit of time to kill and ended up going to a pub called The Cinque Ports which had sports tv screens but was friendly. There was an empty pool table in the back, and Lorraine and I played a game there, which lasted ages because we found it hard to pot any balls being so out of practice. Lorraine said she hadn't played for about 40 years, but showed flashes of suspicious quality.

Then off to a house view. Lovely house, and the delightful owners who had been married since 1971 showed us around. It immediately became our joint favourite, not only ticking our boxes but having a lovely garden too. We definitely could see ourselves living there.

From there we walked to Yvonne's house, via and estate agent. I started to rain at this point but we were soon having tea with Yvonne who gave us a friendly welcome and a nice cup of tea. Her new dog scrabbling hopefully at the window. A beautiful garden outside. She gave us a lift in her mini back to the Station and we trained it immediately back to London Road station. We stopped off (appropriately enough) at the Open House and had half each of a beef burger and a chickpea burger with a beer and chatted about the day.

Then we sauntered back home, Sam having returned earlier. It felt weird knowing that people had been traipsing through our rooms all day. Calliope and Brian in one piece, although Calliope had been sensibly hiding in the garden. The gold sofa a particularly welcome destination tonight. Watched highlights of Brighton beating Manchester United 4-0 which was marvellous.

Below... A fateful sign, the crypt in Seaford, a venue for poetry readings and stuff apparently, and a pool hustler I played in Seaford. 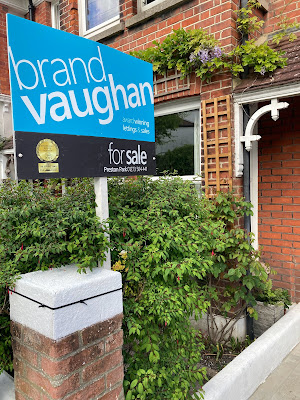 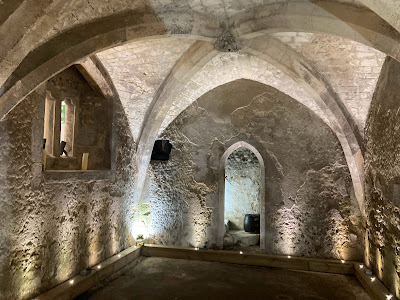 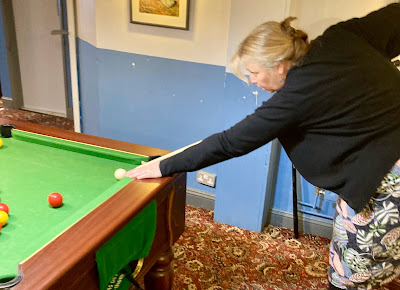