Colder than a postman's knees

March 02, 2018
Another foul night's sleep. Went to bed at 10 and lay there coughing continually for three hours. Eventually slept in exhausted snatches between coughing fits. Feeling grumpy this morning, a mood not improved by our boiler not working. We think it is because the condensation pipe is frozen, but as this is impossible to reach, even with ladders, without first dissembling our wee garden shed, so we simply deployed our two plug in heaters till it is warm enough for the heating to work again. Gah, Catch 22.

A chat with the postman as I was leaving on the house and I commented on his shorts (I was wearing three jumpers, hat, gloves, coat etc.) He said you just get used to wearing them, and you soon warm up doing your round. He also said that it had been colder yesterday, than he could ever remember in his 30 years as a postie. It was minus seven when he arrived in the wee hours for work.

Bussed to Evolution Arts, Ben urged me to speed up if I am going to get my piece finished. Nice chatting with Ben the tutor, who is a patient and thoughtful person.

Powdery snow started this afternoon, as I bussed home. The streets quiet for a Friday. I was going to go to a cafe, but just wanted to be home. Worked comfortably in my study with one of my heaters, the other a plug in radiator, soon warmed up our living room. Lorraine home, having closed the school early this afternoon. She kept her school was open all week.

My French pals have given me another wee job to do for next week.

Still coughing lots this evening. The pharmacist said it is lasting about two weeks. On that count I am still only half way through. Worrying about Lorraine now who is sneezing and coughing.

An unremarkable snap just before another light dusting of snow on Osborne Road today, but perishing cold guv'nor. 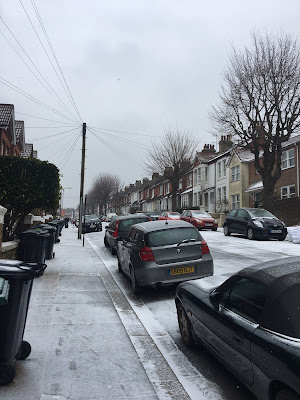 Ben Conti boiler postman The Beast from the East