The turning of a page

October 20, 2013
Up and off to Steyning to see Dawn for danish and coffee. Dawn's charming daughter Ellie is staying with her at the moment, and Russ, Ellie's nice boyf with a beard.

Lots of chatting with Dawn, about the wedding, and also planning the session for gifted and talented children we will do early in November.  Lots of ideas flying about, Lorraine joining in too. When I've worked in schools before I have been thrown in the deep end and had to sink or swim mostly alone, so working with Dawn will be great, and I can learn lots from her.

Home and then to The Basketmakers for a late lunch and to catch up with Matt. An utter deluge just before we left, and during our walk there. Preston Road at the bottom of our street, a running torrent. A couple of snaps below, but what it fails to capture is the rushing sound the water made.

Dried off in the Basketmakers, eating a roast that was exponentially better than last week's one in the Signalman. A couple of beers with Matt and chatted to Irish Tom.  Tom the manager who has been running the Basketmakers for the last few years to general acclaim, and Kate who is Tom's lovely new fiancée (who has also worked with him there for the last year or so) completed their last-ever shift, to a smattering of applause and photographs. They are off to New Zealand,where Kate is from, to start a new life together there. Wished them good luck on the way out, with kisses and shaken hands, and they wished us good luck for next Saturday. The turning of a page.

Home to a quiet night in, girding my loins for a day up in London tomorrow, and Lorraine has two days to do, before we both focus entirely on the wedding.

Below the impromptu river along Preston Road, and Tom and Kate bid farewell. The people photographing them at the time out of shot. Irish Tom far right in the bottom shot. 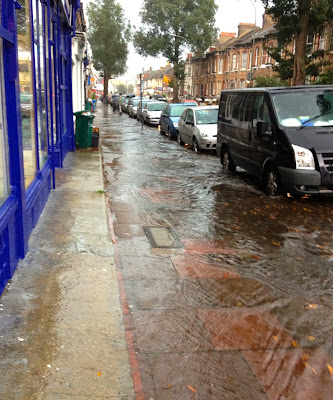 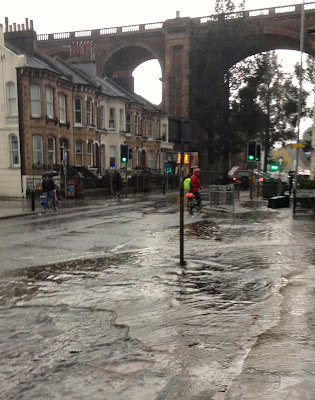 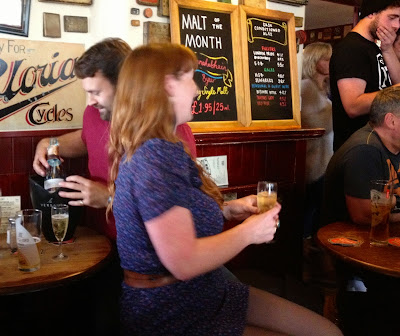 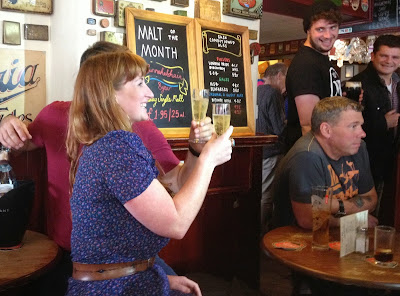