October 30, 2013
Something of a slow start to the day, tucked into breakfast and hung about in a leisurely way, before going for a walk. Wandered down La Rue des Grons, looking wistfully at the old family home. Walked back into St Martin's where we caught a bus into town.

The driver refused to charge us double, which is a controversial new States of Guernsey policy, with the bus price for locals being half. By chance the bus also had one of my poems Hooked as a poster in it. You can't help but be cheered by this sort of thing.

Some wandering about in town, a spot of shopping, with Lorraine buying some tops, before meeting Richard and Jane in Delice. This is the new name for the old market square cafe I have haunted for many years. Richard and Jane had made it back to Guernsey safely, and had caught one of the few trains available, meaning they spent a good deal of time waiting at Gatwick. Good to be able to chat to them properly for a bit. Had a glass of wine, and they introduced us to galettes, which I'd never had before. These are folded crepes, and are delicious. Lorraine and I ate ones filled with goats cheese and bacon, and drizzled with honey, which really was delicious.

Fond farewells to Richard and Jane, then home again on the bus, for a nice doze.

That evening we caught a cab to The Auberge at Jerbourg, where we had an spendid and elegantly presented meal for Rosie, as a wedding present, had booked us a table there. I ate a starter of pan fried local scallops with twice cooked local pork belly, carrot & star anise puree, as a main I had pan fried sea bass fillet, cauliflower puree, crispy fried onion rings, sultanas, pine nuts, and capers. While Lorraine had a starter of Venison Tataki, which was thin slices of seared venison loin with sesame seeds, soy Sauce, rice wine vinegar & maple syrup with wasabi cream. For main course she had local scallops, pan fried in garlic butter with tiger prawns, and spring onion mash. Both of us had an elaborate blackberry parfait for afters, and shared a bottle of prosecco during the meal. All quite lipsmackingly good.

A cab home, talking about football with the driver, and then an absolute bloody final drink in La Barbarie before bed.

Below Lorraine snapped this shot of me beneath my poem on a bus. The plates wot I ate. Perhaps that should be the slates... 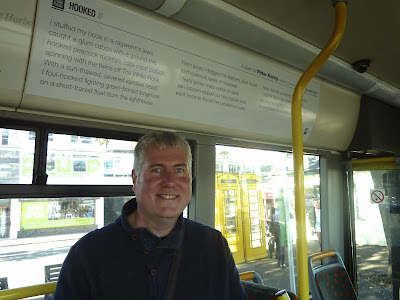 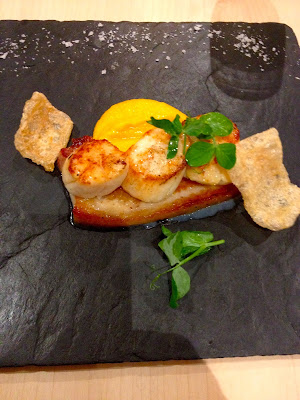 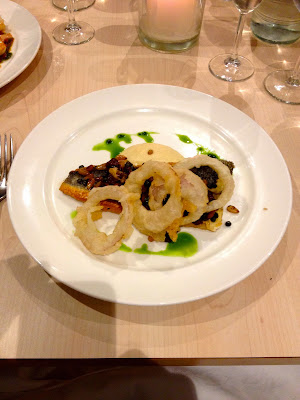 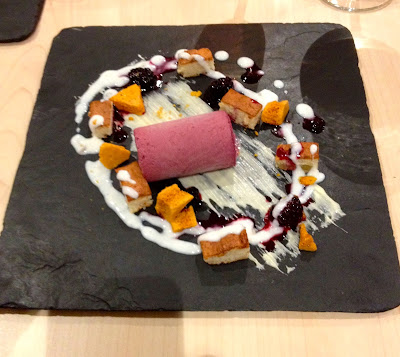 Hooked Jerbourg poems on the buses Richard and Jane The Auberge