A touch of clarity

November 26, 2013
Lorraine working from home today, so a comparative lie in… Getting up at 8 o'clock. Lorraine working on the next desk while I had an excellent day's work on the book, clarifying the introduction and making its argument more rigorous. Quite satisfying and I am beginning to believe that I can actually get the thing finished.

L and I received another wedding present from John and Sue, a beautiful hardback copy of The Tower by W.B.Yeats. Not only is Yeats my favourite poet, but the tower in question where Yeats lived, Thoor Ballylee, is close to their property in Ireland where we have been invited to stay. I would love to visit it.

Nice to have Lorraine at home, and eat soup with her at lunch and cook in the evening before she went off to the school she is a governor at. I also slipped off this afternoon to visit Janet and Ken. Janet is having a heart check up on Monday, and Ken and I are going to collect her or visit her depending on what action is needed, after she had a bit of a funny turn requiring an ambulance the other day -- although this wasn't a heart attack they want to check her out. They both have had flu in the last few weeks. Otherwise a very nice chat with them over cups of Lady Grey tea and some delicious fancies I bought from the Real Patisserie. Janet has some work at a craft fair in a few weeks, and has been hard at work.

Ever the student of my own moods, I seem to be in a curiously sensitive state, craving beauty and able to be pierced by images and words, poetry especially, in a way that I've not done this year. Even an episode of Star Trek forcibly struck me with the weirdness of the idea of having an alien in command of you, which despite having lapped up such fare for decades has never really occurred to me.  I am enjoying being able to consider my next steps from a position of unaccustomed tranquility. Also greatly enjoying a recording of Rothko Chapel by Morton Feldman, a new craze for me.

Lorraine home and we watched another episode of the BBC comedy drama Last Tango in Halifax. Great script and some wonderful acting.

Below the excellent Nicola Walker in Last Tango in Halifax. 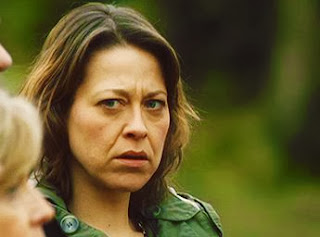