Finding the time machine, and The Devastating Man

November 16, 2013
Surging about busily. Lorraine up and at em this morning buying ingredients for Betty's birthday breakfast which I cooked as Lorraine went out to collect the van we'd hired for the weekend. Then drove into town to drop Betty at work, and Lorraine and I sauntered into Churchill Square where I bought a pair of greatly longed for Van casual shoes, as my existing ones are all on the critical list, as well as a new pair for Betty and then we bought a boxed set of The Big Bang Theory for Beth too as it is her birthday this coming week.

Managed to subdue the Anton homunculus sitting on my shoulder, whispering in my ear to spend the money in my bank account from having sold my house.

Then home, but there in the no rest for the wicked department. Lorraine and off in the van to the Twitten where I clambered up into the loft and removed, with Lorraine and the new owner's help, its contents. There were old photos, old diaries and magazines I'd been published in and so on, as well as an IT graveyard, including old defunct computer made by the Time company, which was somewhat  allegorical. New owners helped us walk the bits along the Twitten, as did Betty who turned up prior to going to London.

Feeling heartily relieved to have done this last thing. Although I loved that little house and living there, I am pleased to say I felt no regretful pangs leaving for the last time. Home, and unloaded, before having a quiet night in. carrying these bits through into the house. Rather worn out by this, and the lively time we'd had the night before, so laid low in the evening.

Meanwhile in Guernsey there has been an unusual turn of events. L and I sent Richard a birthday card entitled The Devastating Man. As soon as Lorraine spotted it, we knew it could only apply to Richard, who is apparently much taken with the idea, and has been walking about the island in a devastating way over the last week or so. The notion has even moved the great man to poetry.

He is a devastating man:
onlookers gasp as he strolls by,
the men with awe; while women sigh
with passion. There’s no better than
this frankly devastating man.

He is a devastating man:
he tells me so morning and night.
He loves a mirror: his great delight
is posing, why, so that he can
admire this devastating man.

A devastating man, he is,
in his own estimation, so,
perhaps he has the right to crow,
although the truth is far from this.
Forgive him. Ignorance is bliss. 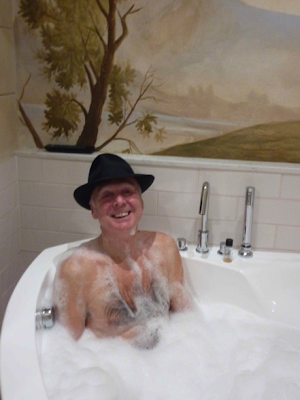 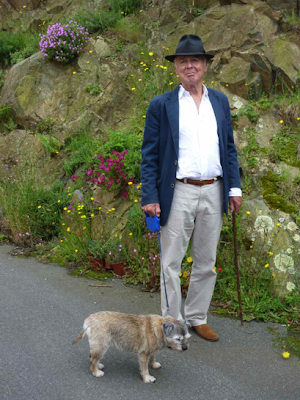