August 13, 2013
A delicious breakfast and a sorting out of the door lock problem had us feeling much happier with our bed and breakfast today. We had planned a rigorous day of fierce gym work, but in the end I felt rather wussy first thing and instead we hired two deckchairs and sat in the sun reading books. I finished Brighton Rock at last. An unpleasant novel in many ways, but very well done. Lorraine reading Jonathan Strange and Mr Norrell on Anton's persuasion. I also did some ham fisted sketching.

Lunch on the beach before watching the Punch and Judy show in the afternoon. I don't now why I love Punch and Judy so much, but I do.  I like everything about it, the little kids calling up at the puppets, the crocodile and the policeman and the sausages and the mistreated baby and more. All good fun.

Home and realised just how much we had been burned by the intermittent English Sun.  Slept for a little before a light supper in Tawny's and a trip to the White Swan, a fairly rubbish pub playing heavy metal music on the speakers in a way that had Lorraine and I snickering.

A day of doing now't much, and by thunder it did us good.

Below the Punch and Judy stall, with its hidden professor. Cloudy all day as you can see but Swanage managed to be in strong sun for most of the time. Mr Punch has a falling out with the crocodile and appeases it with sausages. The carving on the little cell in the courtyard outside our rooms. 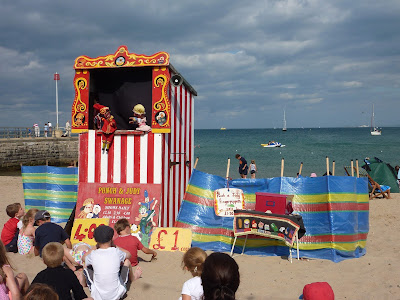 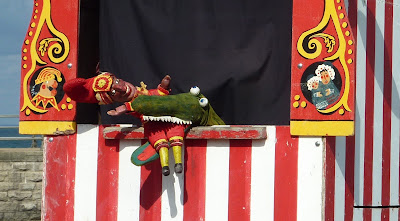 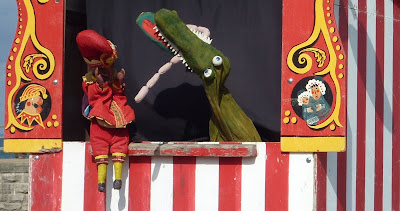 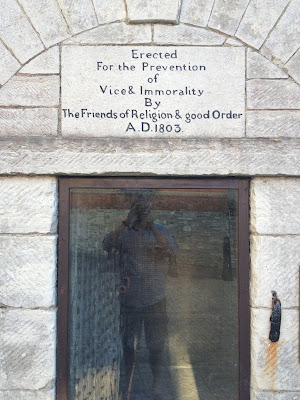