August 30, 2013
Had a vivid dream about Calliope. In it an expert on cat intelligence was assuring me that Calliope was off the scale in terms of her IQ and also that she had highly developed empathy. Lorraine laughed when I told her about this.

Working on the sex in advertising section of the book, and it is getting increasingly complicated. One of those bits that the more you work at it the further away from finishing it you become. Grew slightly infuriated with this as the hours rolled on. Gave up. If in doubt: tidy up. Tidied up, sorting through endless pieces of drivel which made me swear. Lorraine, working at home, zoomed off on her bicycle.

L and I off to Lewes this evening with Rosie. Stopped to consume Spanish tapas in a bistro packed with ladies of a certain age. Sat next to a fatter man than me slurping down oysters with evident enjoyment, and chatted to Rosie who was looking all sunny and relaxed.

Then off to The Dorset, which serves Harveys Bitter a stone's throw away from Harvey's Brewery, for a few libations and to watch part of The Shakespeare Heptet do their thing. Good to see Richard, Steve playing banjo and Claudius. Maria Grazia was there too, and Sam who is a new vocalist helping out on vocals and sounding good. A cheery little place to play, and the band they were supporting were called The Skulking Loafers, who were pretty good and had an excellent song about a cat sung partially in schoolboy French with a guitar making meowing chat noises. The small audience forced them to play twice, and it sounded like an out take from Piper at the Gates of Dawn.

Zoomed back to Lewes station and was home in no time. It is a ten minute journey from London Road station opposite The Signalman to Lewes. A Frasier episode and then bed with Calliope coming to sit on me as usual.

Below Steve and Richard, and Skulking Loafers plying their feline trade. 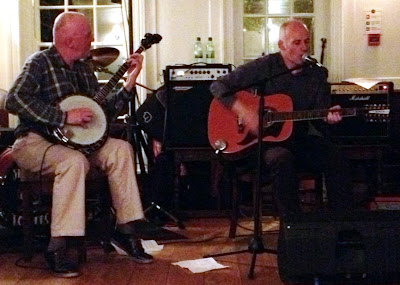 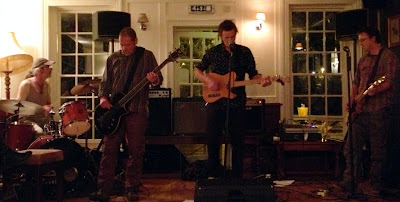