Dancers in the fading light

August 06, 2013
Second day of Lorraine's holiday, and lots of business to be done. I got up early and worked for a couple of hours quite productively on the book before we zoomed into town.

The most important business of the day was to go to Brighton Town Hall to talk to the registrars and officially book our wedding, show birth certificates, passports, divorce papers and so on. Also had a separate interview to make sure it was not going to be a fake marriage. We also went to the venue for the reception and booked that sucker, then stopped in at the printers to get the wee invite printed. Also managed to look at a few hotels to get an idea of prices for potential guests. In The Ship Hotel we let a lady go before us at reception, a lovely older Welsh lady who was asking for a Bible in her room, as she had left her one at home.

Also looked at wedding bands in windows, but by then I was getting a nosebleed and as there is so much choice in the Old Lanes it made me feel like my head was exploding. We also sat in the sun outside Giggling Squid and had a quick Thai lunch, looked at some wedding clobber for me, wedding related candle holders and beads and so on.  Actually really lovely to be getting on with stuff with Lorraine.

All this took several hours, and we had just arrived home when the Tobster arrived with his case.

Lurked about for some time, Lorraine going out for a short bike ride and having a long phone chat with Sam, while Toby and I watched one of the original Star Treks before heading up the road to The Signalman for a couple of cheeky last beers, and some pub grub. As we were talking lots of people wearing bells and jackets of rags, and carrying their own tankards came in and gradually colonised the outside space.

Drawn by the clack of sticks, accordions, shambolic hoofing drifted up from the garden, we went out into the garden to watch. Various types of country dancing, men and women, and mostly with sticks, but sometimes with white handkerchiefs, providing Toby with a suitably eclectic last thing on his holiday. Lorraine enjoyed it too, and went and thanked them afterwards, because she is a lovely outgoing thing.

Home and a fairly early night, but not before we had watched a few episodes of Frasier.

Below some dancing ladies in the fading light. 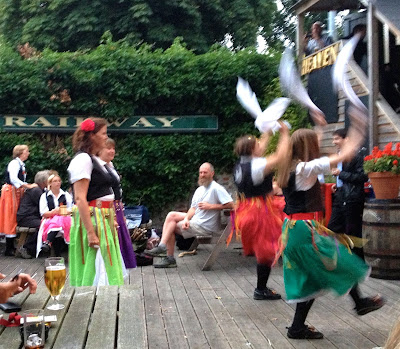