August 29, 2013
Finished Jean-Francois Lyotard's essay What is Postmodernism? first thing this morning. Apparently post modern art or literature etc. annexes new kinds of artistic territory which previously have not been described. This means new kinds of rules are needed for aesthetic judgment to must be made, and these have to be formulated in response to it. I think this can be said of any art movement worth its salt, Cubism for example. I have an impulse to simplify, so this is probably a reductio ad absurdum.

Lorraine working at home, giving Calliope the option of who to plague. I wrote about sex in advertising and looked at dolly birds online all day, while Lorraine did an honest day's work. I broke off to go to the gym, and then at the end of the afternoon we stole away from our desks and I went to try on some wedding garb. I think I look like Mr Darcy after a few pies. But the regular exercise has at least resulted in looser trousers, and there is definitely a few kilos less Peter Kenny than there was a couple of months ago. This popinjay interlude heralding the fact that much of the organising is done now, and the bulk of what remains is simply fun.

Then to unsuccessfully to look for shoes. Tried on a pair of thin pointy boots that were like something from Medieval times and gripped my feet abominably. No wonder the peasantry looked so sullen. Then to the beach to sit at a table in the sunshine, and sip a bottle of cold lager and made some final wedding ring decisions.

Home, Lorraine cooked one of her exemplary curries and we watched more Frasiers, all of which I am watching again.

Have decided to go with Romy and Toby to Japan at Christmas. Incredibly exciting, and went to bed looking at a map of Japan on Lorraine's iPad.

Below, the look I am aiming for. 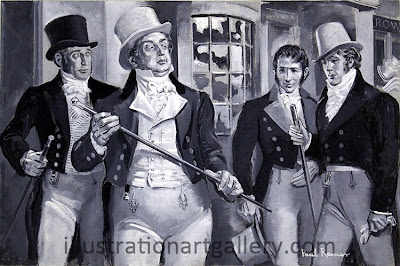