August 10, 2013
Lorraine up and away for a hair cut. I idled the morning happily pottering, doing laundry, changing the water in the aquariums, watching an episode of Frasier and watching YouTube of a concert by Yes at QPR football ground I went to in 1975. It was the first time I saw them, and it was fabulous. The ticket to the concert was a pass into a different world.

Then Lorraine back and we drove off to Worthing to her colleague's barbecue. I didn't know anyone there but had a few pleasant chats and consumed some of the most blackly carbonised sausages I have ever encountered. Several batches were made, all identical. Enjoyed it more than I thought I would.

Then home to change into into a suit and Lorraine into a long green dress, and thence to Peacehaven Golf Course where Sonya was having her wedding reception in the clubhouse looking over the fields. Felt slightly self-conscious in my suit as it all seemed quite casual. Sonya looked chic and chatted to us lots, considering it was her wedding day, and we met Barry her husband, who when I asked if had any advice for me as a groom, he muttered that he'd tell me after.

Then left to our own devices buffet grazing. We knew nobody there except for Sonya. I managed to embarrass Lorraine with an over-exuberant mime-influenced dance. DJ played tripe until the last couple of records. If I ever invented a time machine one of the first things I would do would be to go back in time and exterminate the people who invented the execrable Jive Bunny.

Left the party loaded up with various pieces of cakes that Sonya had made. Drove back along the seafront, Brighton pier looking pretty and curiously comforting.

Below Barry and Sonya dancing their dance. 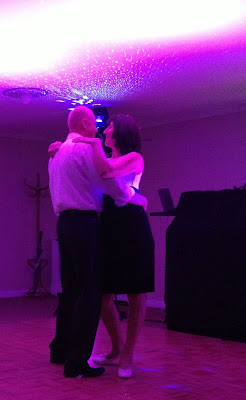