August 16, 2013
A good day to leave Dorset, with the rain hammering down on Swanage rooftops as we consumed our immense and wonderful full English Breakfasts. The bacon and sausage sourced from a local farm was delicious, and there were bowls of a dozen or more muesli ingredients from which I built a morning muesli too. So yes, we had a muesli breakfast followed by a full English breakfast with thick pieces of brown toast. And this morning they threw in some extra fried potatoes too.

Left on friendly terms with Clive and Judie the owners, and we walked off to collect the car, parked the other side of town and drove down the little cobbled lane by the side of the Town Hall and loaded up our cases before driving off towards Studland Bay. The headland shrouded in misty rain. We drove on for twenty minutes or more then down to the beach. It was raining which blurred all the outlines of things at first. Lorraine took off her shoes and soon we were both paddling. The sand at the edge of the water felt crunchily textured underfoot, pockmarked by raindrops.

In the clear water lots of seaweed varieties at the edge of the water, we briefly watched a hermit crab scurrying about with the burden of its shell in the shallows.

Then into the car and a faster journey home, though still taking over three hours and rather tiresome. Lorraine and I shared an apple by way of lunch at two o'clock being still incredibly stuffed from breakfast.

Home at last, and after a bit of house selling admin, off to the gym leaving Lorraine who had driven all the way, snoozing on the sofa. Turns out that the air conditioning had actually been blowing out warm air during the heatwave. Now it is in neutral which is an improvement.

Home and shattered after the exercise. Spoke to Mum who had been with Diane in hospital. Diane has broken her patella, and now has a blood clot. Anton has been largely alone this week. Lorraine spoke to Beth whose show Blondage is going down well, and we are going to Camden tomorrow to see for ourselves.

Yawning my head off on the sofa. And so to bed.

Below Studland Bay. Perhaps not how it appears in the tourism literature. 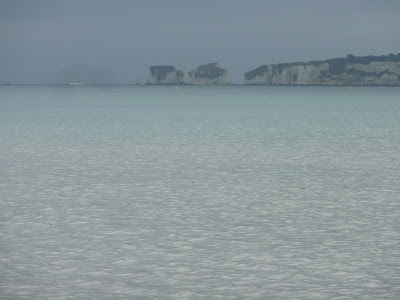 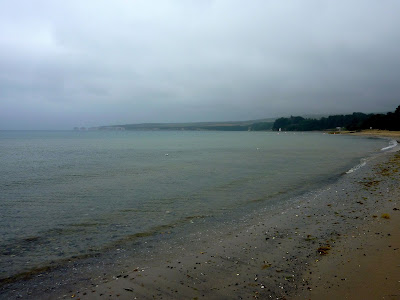