A second dose of Blondage

August 17, 2013
Curiously grumpy this morning. But this wore off the day progressed. Off into town after laboriously tidying up the house for a viewer who didn't show. We are taking the Old Church Hall off the market for the time being, as two out of the three neighbors are trying to sell at the same time, and it is like three fat blokes trying to leave by the same door at the same time. L and I have enough on our plate with the imminent wedding and me organising the sale of my house.

Met Anton in the Eagle for half an hour. He is off to Spain in a day or so for a couple of weeks. We were off to London. Hurried up to the station and made off to Victoria. From here caught route 24, one of the new double decker 'New Bus for London' buses, inspired by the old Routemaster buses I caught to school in the 70s.  I am a bit worried as I type this that I am turning into a train/bus spotter.

To Camden, where we met Beth and her pal Amy, then Maureen, Pat and their pal Cindy. Off then to The Lord Stanley pub. This a large and enjoyably chaotic place, with a bloke playing guitar sitting at a barstool, while a girl spent over half an hour attempting to play When the Saints Come Marching In on the piano. Soon joined here by Mum, First Matie, Malcom and Lynn, and Betty's pal Milly. And then more of Beth's college pals. Sat about drinking and eating food until it was time to go up to the theatre. Really good to see Mum out and about. Lots of chatting in all directions and good to catch up with Mum and First Matie.

When the time came, it was nice little venue for the Blondage show. L and I had gone to see the original version of this in Kingston. Some of it had been changed and altered, but it was substantially the same. Audience enjoyed themselves greatly. A real feather in the cap for Chloe to get this performed. Olivia made me laugh several times, and Beth's repertoire of facial expressions and exuberant comedy is so engaging and funny. She is visibly growing in confidence. It was an excellent stepping stone for all three girls.

Homeward, by bus and train. L and I ending up with Millie and Amy on the train. Enjoyed a shameful ace pizza once home.

Below Betty backstage applying some slap. 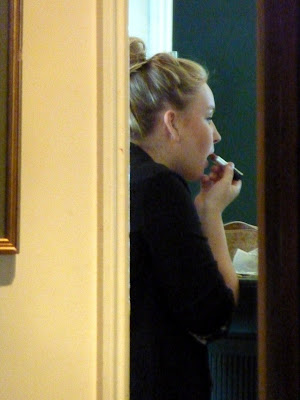